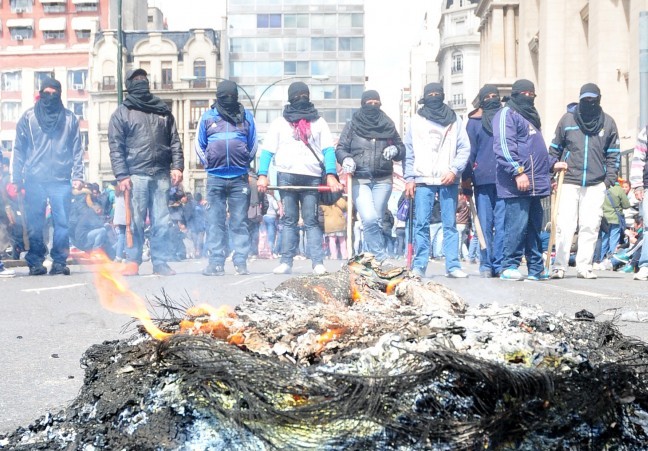 Looking like the “War Room” in the White House, Buenos Aires’ officials have developed a bunker-like mentality in the midst of the most severe heat wave in residents’ memory.

Many in the Argentina capital of Buenos Aires are predicting that December 30 will be the worst day of the extended heat wave, which has soaked the city for two weeks. Protesters frustrated with the government’s impotence in helping to address the energy outages took to the streets, blocking 40 streets and roads Friday morning. The number quickly grew to 160 and then, when night fell, the total jumped to 256.

Convinced that there was a political conspiracy against them, federal politicians, Sergio Berni and Minister Maria Cecilia Rodriguez, sent undercover intelligence personnel of the Federal Police to the larger demonstrations to try to determine if there was any incitement created by political opponents. The answer quickly came back: all demonstrations were spontaneous.

Surrounding the room, are monitors broadcasting live images from the city’s 5000 cameras. Berni and Rodriguez quickly made the decision not to “irritate” the people protesting.

“Unless there are serious security problems, do not send police or firefighters because they are going to be attacked,” Berni said.

Watching one of the screens which was broadcasting the scene from the city’s internationally known monument, Obelisk, 60,000 people jammed the streets demanding action.

The heat wave, which has gone on now for two weeks, is expected to peak Monday with the most critical hours being between 1 and 3 pm when the temperatures rise and people with electricity turn on their air conditioners all at once. Another daily peak usage is around 7 p.m. when people are getting home from work and seeking relief from the heat.

Anger is also rising because of the government’s inability, or unwillingness, to do anything about the power usage. Even options which could relieve the power demand without any financial cost have been ignored.

Just like any other crisis that they have been faced with, they are reacting as usual:  blaming others, including citizens, which only angers people further. “This government takes NO responsibility for anything that goes wrong,” said one demonstrator in the Palermo barrio of Buenos Aires. “They play the blame game and victimize themselves. The WORST ever!!”

Office buildings in the trendy tourist area of Puerto Madero sat empty all weekend, but each floor was lit up 24 hours a day and the air conditioners were left running.

Flashing neon signs have not been turned off and the city’s hotels have not been instructed to implement energy-saving ideas, such as turning off the air conditioning in unoccupied rooms, leaving many vacant guest rooms chilling at 68 degrees and large, cavernous spaces–such as ballrooms–a cool 70 degrees.

“This government is not capable of handling anything at all. We are on auto pilot, it is going to be two very long years. Everyday, after reading what the government has to say on different topics – power outages, inflation, insecurity, etc I puke a little bit in my mouth,” posted one protester on an Argentine online forum.