Dead Mice With Parachutes Bait for Snakes in Guam 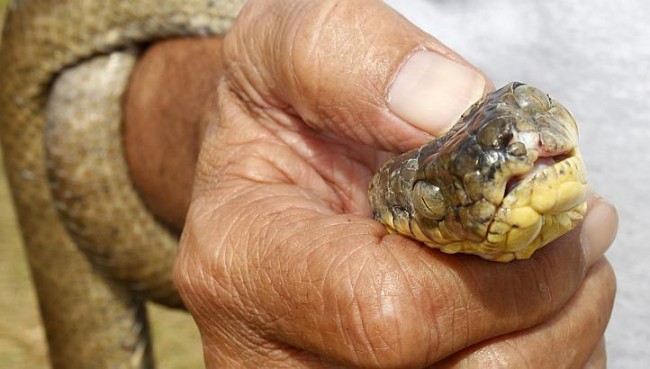 Dead mice with parachutes are being dropped over the island of Guam due to an overgrown population of snakes. Two thousand mice have been pumped full of drugs (acetaminophen, to be exact), equipped with cardboard parachutes and data-transmitting radios, and then dropped over a United States Air Force base.

These snakes are brown tree snakes, which kill birds, lizards and fruit bats native to Guam. The native birds could easily become extinct. Not only that, but the snakes also short out the island’s electrical system. The snake infestation is so bad that there are regular power outages that have lost Guam millions of dollars in damages. The problem isn’t just about saving native wildlife–it’s also about saving the livelihood of this small island. Brown tree snakes, however, are not dangerous to humans, and the dead mice drops are happening in areas where humans do not reside.

The U.S. Department of Agriculture has been working with biologists on this project since 2010, when they did a couple of test drops with 280 mice. The last drop was in September, when more dead mice drops were made. Then on Sunday, 2,000 dead mice were dropped in two areas over the Andersen Air Force Base after being filled individually with 80 milligrams of acetaminophen. This method of eradicating the brown tree snakes, an invasive species, appears to be the most effective way of eradicating the brown tree snake without harming humans and other wildlife such as deer and pigs.

According to Dan Vice, the wildlife biologist with the U.S. Department of Agriculture, using cardboard is better because it “is heavier than the tissue paper … It then floats down and ultimately hangs up in the forest canopy. Once its hung in the forest canopy snakes have an opportunity to consume the bait.”

Another method of eradicating the brown tree snake is by using dogs to sniff out the snakes that might arrive in busy ports in Guam. Some snakes have been detected in Hawaii and other Pacific islands so the dead mice drops do include focusing on controlling the snakes in those areas. Fumigation is another method that is used in cargo; the Environmental Protection Agency (EPA) approved the use of methyl bromide in cargo, and two other repellants have been also been tested.

The brown tree snakes were accidentally introduced to Guam in the 1950s, when it probably arrived via imported cargo. The brown tree snake is native to Australia, Indonesia, and Papua New Guinea. Because this snake is an injurious species, under the Lacey Act, within the U.S., this reptile cannot be imported or exported between the States without a specific permit.