Everglades National Park: Four Reasons There Is Little Hope for the Whales

By Jim Malone on December 5, 2013Comments Off on Everglades National Park: Four Reasons There Is Little Hope for the Whales 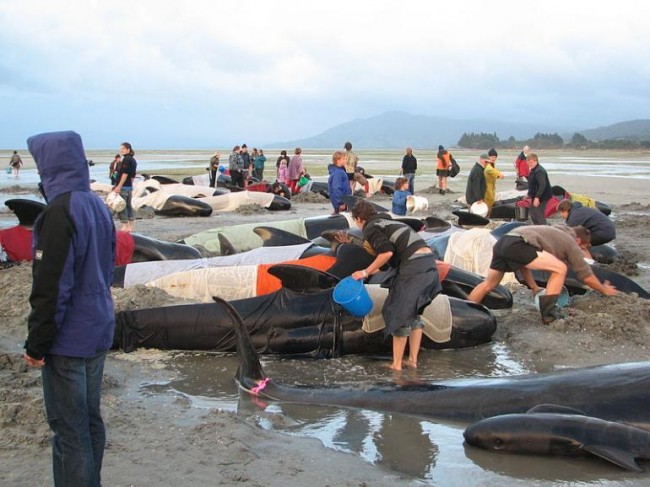 Everglades National Park is host to a large group of stranded Pilot whales, there are four reasons that there is little hope for the whales that remain. To date, at least 20 of the stranded whales have already died. In the case of four of them, rescuers had to euthanize them because of the amount of damage they had sustained. Time is running out for these massive mammals, and there are five good reasons that there is not much chance that they will make it.

The first reason is that these whales are a family. Pilot whales, by nature, form bonds that are deeper than many species. They form family units of 10-30 whales, and they remain loyal to each other for life. It is more than the normal family group that is kept together by the formation of mating pairs and their children. The pilot whales are one of the only species that go through menopause, with post-reproductive females remaining with the group for life and looking after the younger members of the family. These whales do not leave family members behind, which is exactly what the rescue efforts are trying to get them to do in order to save their lives. It is not clear what drove them into the Everglades National Park, but making them leave may prove too tall of an order.

The second reason that there is little hope for the whales is that the area these whales are stranded in is Everglades National Park. This area has absolutely no cell phone service, and is miles from any support infrastructure for rescue efforts. It is nearly impossible to coordinate efforts and share information. Spotters in helicopters and watercraft are providing information that is nearly useless by the time it reaches shore-based workers. These whales chose one of the worst places possible to strand themselves.

The third reason that this story might not have a happy ending is that nobody knows why it has happened. Specialist from all over have converged to try to figure out what has motivated these whales to get themselves into this dangerous situation. Without knowing what is behind the stranding, it is difficult to contrive an enticement that will supersede their desire to remain with family members who cannot be saved. Autopsies are being done to attempt to detect disease or any indication of what might have driven them to this desperate plight. Rescuers need to find a way to get the whales to safety, but unless the autopsies produce information quickly, there may not be enough time left.

The final reason that these whales may not be able to be saved is the fact that the more of them that die, the more danger they are in from predators like sharks. Already sharks are gathering and starting to attack some of the whales that have already died. The pilots will be even less likely than they have been to respond to attempts to direct them with predators in the waters nearby. They provide yet another influence on the whales that is counter-productive to rescue efforts. If more resources are not put to the task, and quickly, these four reasons demonstrate tragically why there is little hope for the whales stranded there in the Everglades National Park.

Everglades National Park: Four Reasons There Is Little Hope for the Whales added by Jim Malone on December 5, 2013
View all posts by Jim Malone →