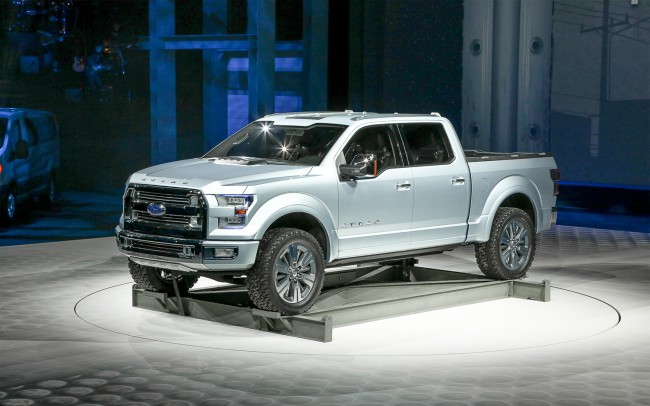 The Ford Motor Company is raising the stakes in the pickup market with the introduction of an aluminum based F-150 next year.

It is a bold move. The F-150 has been the best selling vehicle in America for over 30 years straight, so to make such radical changes is a move that signals they want even more.

With every incarnation the Ford pickup has evolved in a safe manner as the company did not want to lose the best selling vehicle crown. That crown is gold in terms of publicity, especially considering the timeline. To put the sales numbers in perspective it is estimated that Ford sells a new F-Series every 46 seconds in the states.

So, why take such a gamble on their best selling vehicle? Simple question, simple answer – gas mileage. With gas prices heading north and rising fuel economy standards on the horizon, the blue oval wants to address both issues head on. In short, they want it all, the mileage crown, the best dressed crown – if the Atlas concept pictured above is a clue – and the sales crown; the former two will help solidify the latter.

To achieve this feat it has a number of innovations slated for the 2015 model, but it is the move to aluminum that has the industry talking. Ford’s plan is to lighten the vehicles, using aluminum sheet metal by up to 750 pounds. The weight loss will have a trickle down effect on the rest of the vehicle components. Less weight equals reduced strain, equals smaller components and allows smaller more fuel efficient engines to replace larger siblings. Combine that with a new eight speed transmission and the new F-150 should power past the Chevy Silverado and Dodge Ram in the mileage wars.

The potential fly in the ointment is the use of aluminum in the full sized pickup. It’s a gamble and many wonder whether it will be up to the job. There have been rumors that some of the shipments of aluminum have not met Ford’s specifications. Due to the huge demand of the F-150 and the complexity of transitioning from one model to the next there will be a great deal of pressure on Ford to do it right. Factor in a potential six week retooling period at each of the two F-150 plants to switch to aluminum and there’s potential for a bottleneck in supply that has dealers stockpiling 2014 models.

That is the technical side. There is also the public relations side to combat. Ford trucks are built on the “Built Ford Tough” image that extols their virtues as the workhorse of the pickup market. The introduction of aluminum to some is worrisome, think of an empty beer can. To sweep that image aside Ford has apparently asked one of the suppliers, Alcoa Inc., which also supplies aluminum for military vehicles, to provide some field worthy examples to highlight the products strength.

The third variable in the gamble is the continued downsizing of engines in what are perceived as big powerful vehicles. For most old timers the thought of stepping down from a V8 to a V6 was unthinkable only a few years ago, but Ford has won them over with their very popular EcoBoost engines. There is talk of Ford taking it a step further; to a sub three liter EcoBoost engine that might well have those same old timers slapping their sides in derision and spitting on the ground in disbelief. Hey, they have done it before.

It will be an interesting year ahead for the full size pickup market. Any way you cut it, Ford is taking a huge gamble on an aluminum clad F-150 and one thing for sure, one has to admire their moxie. It is one thing resting on personal laurels, it is another betting the farm. No guts, no glory….Built Ford Tough.