Gunman in Arapahoe School Shooting Dead, Students out of Danger

By Michele Wessel on December 13, 2013Comments Off on Gunman in Arapahoe School Shooting Dead, Students out of Danger 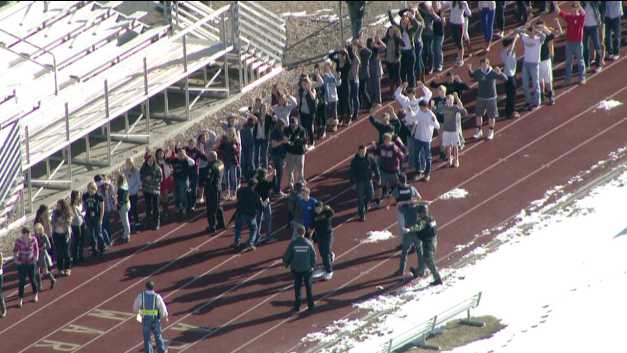 The gunman allegedly responsible for the shooting today at Arapahoe High School in Centennial, Colorado is reportedly dead of what appears to be a self-inflicted gunshot wound and students are out of danger.  This information came from public remarks made by Sheriff Grayson Robinson upon the situation having been secured.

The shooter was reportedly a male student at Arapahoe High School. Sources say that he entered through doors on the west side of the school, asking for a specific teacher by name. The teacher was apparently informed of the situation and exited the school.

The gunman’s two alleged victims also appear to have been students. One is said to have been transported to a local hospital with critical injuries, while the second apparently has lesser injuries which may or may not have involved a gunshot. One of the injured was reportedly shot after confronting the alleged gunman. No further identifying information has been released about the victims or the shooter at this time. Sheriff Robinson indicated that whether a second suspect was involved in the incident today will be a part of their ongoing investigation.

More than 2,000 students are believed to have been in the school at the time of the shooting. Students were evacuated with their arms raised and are being reunited with their anxiously waiting loved ones at an area church designated as the location for that purpose.

Experts are cautioning parents, family member and friends of students to be cautious with them as they begin to process the incident that they were a part of today. Although, they are aware that the shooter is dead and that they are out of danger, anxiety is still likely to be present and the stress from today’s events may linger. Depression and anger may linger and may result in “some pretty extreme reactions coming out of these kids in the next 24-48 hours.”

Today’s shooting occurred in the Denver-Aurora metro area which has been no stranger to this type of violence over the years. Arapahoe High School in Centennial, Colorado is a part of the Littleton, Colorado school system and is just 10 miles away from the site of the infamous Columbine High School shooting that took place in 1999. That attack resulted in 13 dead and nearly 30 injured at the hands of two Columbine students. It also resulted in the two shooters taking their own lives.  In addition, Arapahoe High School is  nearby the Aurora, Colorado movie theater where a gunman killed 12 and injured more than 60 patrons attending the midnight premiere of The Dark Knight Rises in 2012.

The shooting this afternoon also occurred on the eve of the one year anniversary of the 2012 shootings at Sandy Hook Elementary School in Newtown, Connecticut. December 14 will mark the date of the anniversary of the Newtown shootings, the second deadliest mass shooting by a lone gunman in American history. Adam Lanza, the shooter in Newtown, killed 20 students and 6 staff members at Sandy Hook Elementary before taking his own life.

Details will no doubt continue to emerge as to the identity of the now-deceased shooter and his possible motives in the hours and days to come. For now, Arapahoe students and their loved ones can be grateful that the immediate danger has passed.