“Inimitable, and that’s the i-word.” 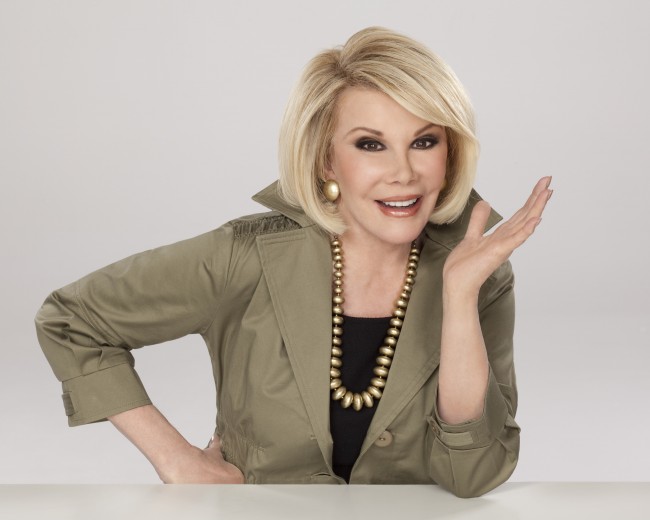 Joan Rivers in her own i-word way recently defended her friend Alec Baldwin in a tirade laced with more alphabet words than one can swing an s-word at. A minor story with some larger implications.

Joan’s tirade belted out every politically incorrect word one can think of, summarizing the outburst with a call to get over it, to move on because everybody’s something, which is to say if one digs deep enough all will find a derogatory word that identifies them, their sexual preference, their heritage, their occupation, their race, their physical appearance, their religion or their faith.

In her own i-word way one gets the sense that Joan had had it up to her most recent cosmetic surgery with the political correctness that’s censored language like a Church-lady with threats of social Siberia for transgressions of any stripe. Joan Rivers went full gale into the eye of a storm that’s been building offshore for years.

Words are nothing more than tools people use to communicate information, thoughts, observations, points of view, needs, wants, biases, prejudices, praise and affections. And, yes, words have power, enormous power to enlighten, darken, persuade, move, touch and change minds, hearts, and spirits. They can offer insight into a person’s soul, and in the hands of a chronic dissembler they can provide the opaque cover behind which one can hide his or her real intention, meaning or point of view. In and of themselves they’re merely emitted sounds that carry the meaning ascribed to them. In and of themselves they are not the heart of the matter, the intention itself, the seed and substance of what the person seeks to communicate, though by their nature they can reveal or hide all.

For sake of exposition, imagine the following: A known racist calls an African American his dear friend. He uses the word “friend” to hide his true feelings, to misdirect the attention of others. Obviously the word “friend” is not a slur or an ugly word and yet, having been steeped in a racist’s lie, the word “friend” takes on a certain darkness as it conveys an untruth and promotes one racist’s hypocrisy. Therefore, does a good word buried in a dark context, steeped in a lie, become a slur?

Lawyers endure (though many deserve) “lawyer’s jokes.”
– What do you call 300 lawyers at the bottom of the sea?
– A good start.

And lawyer jokes can be told in polite company. Nobody’s going to gasp with the vapors at a dinner party where the cutlery’s silver and the glass is crystal if some guest offers up one more lawyer’s joke. Even the lawyer who’s probably throwing the party will get a kick out of it. Same can be said for Irish jokes or Yankee-Brit jokes. However, jokes about Italians or Polish are still on the bubble, sometimes ok, sometimes not. Jokes about Jews, African Americans, gays or the disabled are almost always deemed to be in bad taste – each being a third rail of polite dinner conversation.

Now why is it that some jokes are ok and others are not? One reason might be that the political correctness of telling any joke about any particular group of people is proportional to the extent that that group has assimilated into the society at large, and, because of that assimilation (in effect a positive “disappearance”), has obtained some power, political, economic, cultural, etc., which then supports the group’s sense of identity and membership in the society at large.

The more one is “in,” the greater the likelihood he or she will have to endure jokes at his or her expense, though the price is not high. The unstated and underlying truth is that the joke, itself, politically allowable if not wholly correct, is a sure sign that the person so roasted has, in fact, arrived. After Kennedy became president, Micks and Harps were still Micks and Harps, but the old sting was gone.

For powerful people the child’s rhyme is true. Sticks and stones will break their bones, but names will never hurt them. On the other hand for minorities who’ve yet to fully assimilate into the larger society and who remain uncertain as to the validity and security of their membership in that society, words, names, slurs and even jokes are a different ball game. Words and names will hurt an outsider in ways an insider can hardly appreciate, because such words, names, slurs and ridicule pull back the all too thin curtain on the underlying prejudice, ill will and even hatred alive and ill in the larger society. That’s one reason why slurs have been censored, so that society need not be reminded how much hatred and prejudice is still out there, and because there’s too little distance between the slurs, themselves, and the mean spirit of the person who feels free to utter them.

In their various “liberation movements” certain minorities have tried to deal with the awful power of such slurs in different ways, of which politically correct censorship is but one and perhaps not always the best way. Sometimes a minority will “take back” the word to itself in an attempt to denude the slur of its power. In the 80’s in Berkeley, California, some progressive radicals with physical disabilities took to calling themselves crips or cripples, an otherwise unattractive word, derived from the verb to creep and all that “creeping” implies. In the late 70’s a number of feminists went public with the admission that they were all lesbians (in fact some were and many were not) in an attempt to empty the word of its power, which, at that time, resided in the negative connotation ascribed to alternative life-styles. And most recently one African American sports figure, who bristles at the term African American (“I’m American, dammit!”) admitted to using the n-word several times a day. His reasoning was this: “Whitey” with all his politically correct rules and regulations wasn’t going to tell him what word he could or could not say.

Hiding a word, refusing to say a word, enshrining it in silence can give a word more power than it deserves. No longer is it a mere phonetic tool. Rather it can become a sign, symbol, shorthand shortcut like the tabs on a laptop screen to express with two syllables hundreds of years of crimes against one particular segment of humanity.

And what we resist persists. What we hide or affirmatively ignore looms ever large in our collective consciousness. A word should be the mere expulsion of breath and emission of sound to serve the deeper purpose of contact between one human being and another. And it’s the invisible and inaudible words within a person that too often express themselves through flawed lives, sparked with mean spirits, that must be accounted for, censored, softened, changed, even forgiven, and perhaps someday healed. In her own way, Joan Rivers defended Alec Baldwin.