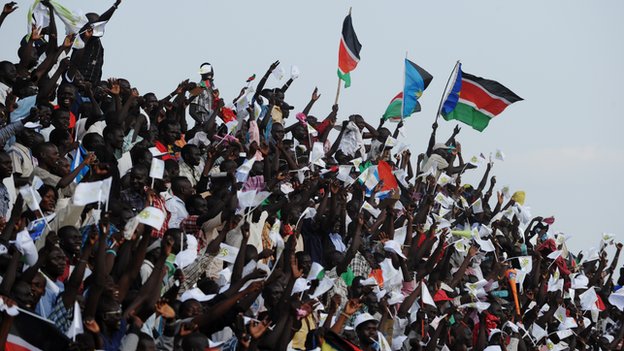 United Nations (UN) representatives are reporting that close to 20,000 civilians have fled to their two compounds in Juba, South Sudan as a result of an attempted coup. Information is only beginning to circulate regarding what is happening in the city, but initial estimates are that more than 500 people have been killed in the fighting. In addition to those who have perished, doctors from one hospital in Juba report having treated more than 100 people for gunshot wounds.

South Sudan President Salva Kiir reported to UN officials on Monday that a coup attempt had been staged by forces supporting former Vice President Riek Machar, who was recently fired by Kiir. Reports are that an army headquarters close to the University of Juba was attacked by Machar’s supporters. Despite the fact that Kiir reported the coup attempt had ended and 10 conspirators were captured, fighting still continues. Machar was not among those reported apprehended. Kiir belongs to the Dinka ethnic group, while Machar is from the Nuer. Fighting appears to be along these ethnic lines and President Kiir has reported to the UN that Machar’s supporters are targeting specific Dinka communities with violence. The President has ordered a curfew be enforced between 6 p.m. and 6 a.m. until further notice. A door-to-door search for participants in the coup attempt is being undertaken.

In communications with other African leaders, Kiir continues to insist that the situation is under control. The reports coming from among the nearly 20,000 people seeking refuge in the South Sudan UN Mission at Juba tell a different story. Tales of tribal lines being drawn and ethnically motivated murders have everyone’s thoughts turning to the genocide in Darfur to the northwest. Ban Ki-moon, Secretary-General of the UN, has made announcements urging a calm approach by all parties involved in the conflict. He specifically charged Kiir with tempering his response and not escalating the ethnic violence. State Department spokesperson Marie Harf echoed the sentiment, indicating how “deeply troubled” the US was over developments in the region.

All non-essential personnel have been ordered out of South Sudan by the United States State Department. Americans in the region have been told to leave the country immediately. President Kiir has indicated that the army and his government are controlling the situation, and that he would make additional announcements at a press conference. Specifics as to the time and place of that press conference have yet to be announced.

African Union (AU) forces are already spread thin dealing with fighting along ethnic and religious lines going on in the Central African Republic as well as in the Democratic Republic of Congo. The last vestiges of dozens of failed or stalled revolutions from across the continent continue to hold territory in the mountains and jungles of these countries that are among the poorest in the world. Humanitarian and military concerns are constantly vying for the same resources,. UN officials are scrambling in an escalating effort to determine an appropriate response to the reports coming out of Juba in South Sudan, and to the nearly 20,000 seeking refuge and a sense of safety in a rapidly destabilizing part of the world.