Kim Kardashian Oozes Love, If No One Noticed 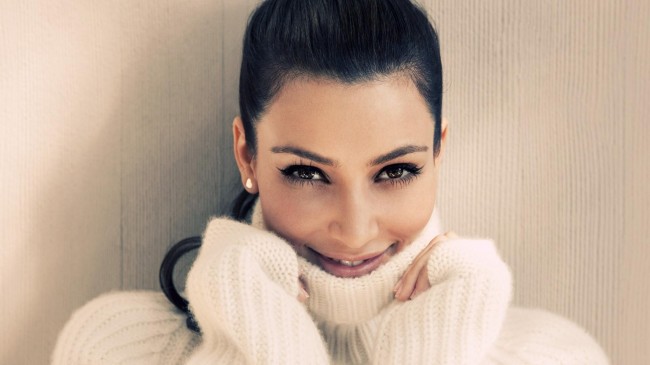 Kim Kardashian genuinely oozes love, if no one noticed. According to Earsucker, Kim shared her VIP night with a fan recently at the Kanye West New Orleans concert. Her fan, going by the tag @MyleezaKardash was at the concert and tweeting that she was “looking for Kim SO hard…” When Kim learned this, she sent her security person over to Myleeza. The star-stunned fan was pleasantly surprised with the news that Kim had invited her and a friend to watch the concert with the popular reality star.

Based on the tweets from Myleeza, she states when she and friend, Sara,  got to the VIP section, Kim promptly arose and waved them over. The tickled fan tweeted that Kim told her, “Hey Myleeza! Thank you for coming!”  After the concert, Kim further surprised Myleeza and Sara with an invitation to go backstage for a meet and greet with her fiancé, Kanye West.

Of that meeting with Kanye, Myleeza relayed, “HE WAS SOOOOOOOOO NICEEEEE! I said, ‘Oh my God! We’re taking a pic with the couple of the UNIVERSE!”

“I had the best time, so happy you did too! Xo.” Kim tweeted after meeting with the lucky fans.

Indeed, Kim Kardashian oozes love. Last month, she was a guest on The Tonight Show, with Jay Leno. That’s when she wore her publicly noted provocative see-through white crochet dress and super clunky high heel shoes. She looked great and carried herself with poise as her pleasant voice issued an even lovelier tone that just put all haters to shame, really.

On the show, Kim talked about the night that Kanye proposed to her. Her eyes and face still glowed by the surprise of it all as she graciously explained the details of how he managed to get her to the ball field without spoiling the surprise. Kim’s ease and calm demeanor connected with the audience as they perceived a loving mother, with no ill intentions or any selfish endeavors, as typically alluded to. She was down-to-earth, witty and a wonderful addition for Leno’s show.

Kim warranted compassion and respect as she spoke about the ridicule she met while pregnant and swollen due to the pregnancy. Kim spoke of her hurt when the media attacked her weight, it was an attribution of her pregnancy and she was baffled by the demeaning responses. She spoke of rising above it to welcome her daughter into the world.

Truly, a family gal, Kim Kardashian oozes love, if no one noticed. When she talks about the sanctity of family, love is all you hear.  She was not a guest on Leno’s show to promote her products or her career, or even to flaunt the many blessings she acknowledges to have. Kim demonstrated that she is committed to developing and maintaining bonds with her family.

With families, there is always some level of discord. Sharing parenting duties can create stress, but doesn’t mean it will be the end of a new couple – squabbles are a common factor of new love. New reports have surfaced that Kim and Kanye are arguing over “where to spend Christmas.” Which is typical of most romantic relationships when lovers, for one reason or other, have not yet ironed out their plans and agreements.

According to NewTalkZB, Kanye wants Kim and the baby to join him for the holiday in New York, but Kim prefers to stick with tradition and celebrate the festivities with her large family in LA. Sources are saying that this is rousing much noise because Kim anticipated Kanye would be agreeable to spending Christmas Day with her side of the family when in fact what Kanye wants is for them to “do their own thing.” Ah, Kim Kardashian oozes love – she will work this out and if no one noticed, just stay tuned to the latest development and more than likely, you will see the love.