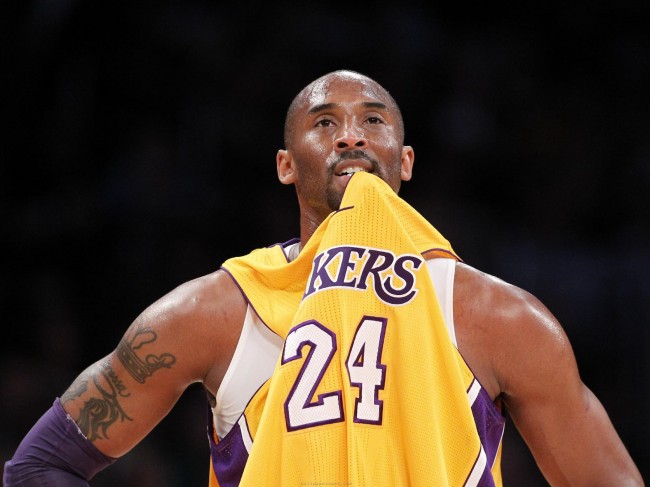 Kobe Byrant’s return to basketball was announced in high fashion. After the four ‘other’ starters were announced, the arena went black and the Imperial March from “Star Wars” began to play. Unfortunately for Kobe and the Lakers, that was about as intimating as it was going to get in the star’s return, which started grand but ended embarrassing.

Bryant tore his Achilles’ tendon last year and has impressed teammates and players around the league with his speedy recovery. However, it looks like that recovery is still a work in progress.

It seemed like a great idea to start him against the Toronto Raptors. A team that has been whipped out from trades and is sputtering. But Amir Johnson had a career night, dropping 32, as the Raptors embarrassed the Lakers’ on Kobe’s return 106-94.

Bryant looked far from his normal self, not living up to the grand entrance, but turning in a weak one during an embarrassing Lakers loss. Bryant scored only eight points on two of nine shooting and committed an uncharacteristic eight turnovers in his 28 minutes of work.

As would be expected of any superstar with Bryant’s determination, there were only harsh words of self criticism offered by Bryant to reporters after the game.

Bryant said that his tendon felt fine but that he felt completely out of the rhythm of the game. He jokingly added that “I think the last time I had eight months off I was still in the womb.”

The star continued by saying that there were a ton of things he messed up during the game. “I can’t wait to watch the film and start criticizing every little thing.”

With the Lakers down to only one able bodied point guard, Steve Blake, Bryant’s turnovers were by far the most disconcerting part of the game for Lakers’ fans and Bryant himself. Kobe said he would give himself an “F” for his performance.

Coach Mike D’Antoni was more sympathetic towards his best player’s troubles. He pointed out that it is ridiculous to expect any player to be in midseason form after suffering such an injury and added with conviction that Kobe will “be a dominant player [again].”

D’Antoni said that Bryant can beat a team in so many different ways it is only a matter of time before he finds a way to start scoring again and become impactful. “He can play any way,” D’Antoni added.

What Kobe must figure out how to do again will be no easy task. He cannot merely be an impactful role player for this Lakers team. The Lakers need him to be the star performer he has been for more than 15 seasons.

His past numbers are actually so astounding it is hard to wonder how a player could achieve them with two healthy legs, let alone coming off of an injury. Bryant has never averaged less than 24 points a game since 1998, a truly breathtaking statistic.

But the injury is not all that should scare fans. Bryant is already starting to get old by NBA superstar standards. Expect him to reverse last night’s script quickly but watch out to see if he can be the same star he once was. His return was marked by a grand entrance, but turned into an embarrassing end. Time will tell if he can get back on top of the league.