By Melissa McDonald on December 10, 2013Comments Off on Malnutrition Problems for Children Outside Philippines Capital 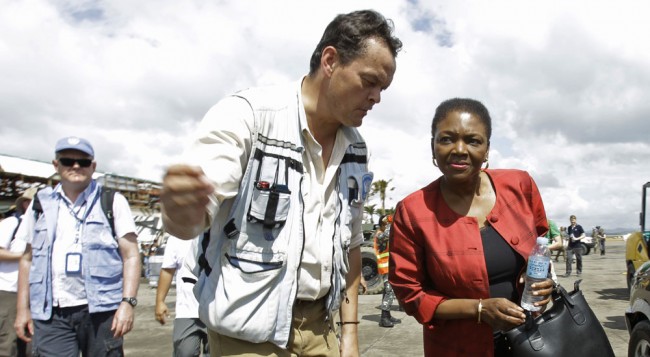 Severe malnutrition problems for children, particularly outside the Philippines capital of Tacloban, are being witnessed as a result of Typhoon Haiyan. The UN has stated that infant malnutrition is on the increase and is a prominent threat.

Although, aid is being provided, survivors are still searching desperately for food and water. Supplies are extremely low in comparison to the amounts that are needed. This is because of the difficulties found when trying to reach those communities requiring help. For example, road blocks have hindered transportation, along with the lack of trucks and fuel to deliver supplies.

The government has also been reported to be a missing link, as people are left to their own devices, awaiting reinforcement and trying to get out of the country. Day and night, people stand in lines waiting for military aircraft to arrive.

Valerie Amos, the UN humanitarian chief (pictured above), visited the disaster zone. The words that followed demonstrated the scale of destruction, as he stated his grave concern that nearly 1.5 million children were at risk of acute malnutrition and nearly 800,000 pregnant women were in need of nutritional help.

Below is a video of the aftermath of the storm that was filmed two weeks ago. Bastian Hartig reports, as he interviews survivors that have been left to perform jobs that they were never trained for, and shows that people outside of Tacloban are being ignored, as they are forced to struggle to find food and water.

Some supplies that are being delivered are not from governmental organizations, but rather ordinary people from the south of the Island, who are bringing donations. However, this is still not enough to provide for all survivors in the Philippines and malnutrition problems for children outside the capital are raising concerns.

Hospitals are providing help to as many children as possible, however many can not be reached in more desolate areas. After a disaster like Typhoon Haiyan, food shortages are inevitable. Help needs to be stretched further as world-wide focus is geared towards Tacloban. 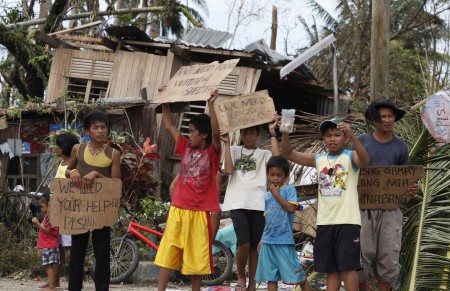 Survivors in the surrounding areas have complained that help is rare and can not be depended upon. Children hold make-shift signs pleading for more food. Mothers have voiced concerns for their children who remain hungry even after supplies have been delivered, because of the amount of people they have to be shared among. The death toll continues outside of the natural disaster, due to starvation and malnutrition.

As malnutrition problems in the Philippines remain, children outside of the capital need to be remembered and made a priority. The lack of access to clean water is triggering an escalation of infections, and the lack of nutritional food is contributing to the dire health of young children. Survivors continue to plead for more help.