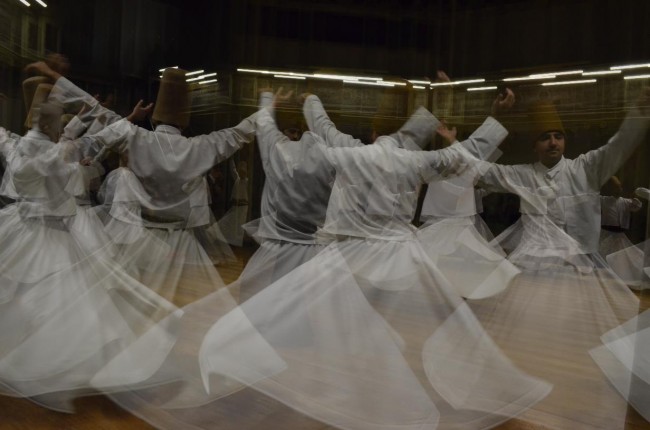 Mevlevi dervishes have symbolically united with God during the 740th Mevlana Festival in Konya, Turky. Whirling dervishes from the mystic Muslim brotherhood gathered together to commemorate the death of a person who taught them to seek God through Love, Mevlana Jelaleddin Rumi, Islamic philosopher and a poet. The tradition, which started the year following his death in 1273, is still alive. It unifies Rumi’s followers within an exotic whirling dance that signifies the mystical journey of a human spirit to Perfection.

The whirling dance or Sema ceremony, as Rumi’s followers call it, is something to remember. When exalted dervishes whirl, following the musical improvisation on the reed flute, they symbolically tell a story about the Universe: rotating of the moon and planets, man’s astonishment in front of the God’s creation, and love that unifies the Truth and the one seeking it. Included in the list of cultural heritage of Turkey by UNESCO, the Sema ceremony is more than a dance. It is a sacred tradition that exists for more than 700 years, inspiring mystics of Islam on their way to fulfillment, and on this way they have to learn compassion, tolerance, and universal love.

According to the legend, the Sema ceremony was started by Rumi who spent most of his life in Konya. There, in Konya, once he heard a rhythmical striking of a hammer, passing by a jewelry store, and in his mystical exaltation interpreted it as a symbolical chanting of the God’s name. He felt so immensely happy that he immediately started dancing, expressing his love to God through his whirling dance.

That delightful ability of Rumi to see love and charm in every manifestation of created life made him one of the most praised Islamic thinkers and poets. His unorthodox version of Islam was beautiful and wise, bringing him admirers among people of different religions. According to the historical evidence, when Rumi had died, people of other faiths living in Konya had participated at his funeral, admitting that they learned about Jesus and Moses from him.

His seven pieces of advice left to his followers sound like a poem by itself:

Be like flowing water in generosity and giving aid.

Be like the night in covering over the fault of others.

Be like the dead in anger and nervous irritation.

Either be seen as you are, or be as you are seen.

The artistic education was necessary to a Rumi follower. To become an accomplished Mevlevi dervish, one had to study poetry, music, calligraphy, bookbinding and miniature painting, in addition to religious studies and hard work in the order’s kitchens. That artistic component kept Mevlana traditions alive even after the order was banned in 1925 by Ataturk, the leader of the modern Turkish Republic. In 1954 the Sema was restored to be seen by public, and Mevlevi dervishes started touring the world. They were symbolically united with God on the stages of London, Paris, New York, San Francisco, Denver, Seattle, Portland, and their beloved teacher, Jelaleddin Rumi, was even named the most popular poet in America in 2007 – the year UNESCO celebrated 800th anniversary of Rumi’s birth. The day of Rumi’s death is also celebrated by his followers not less than his birth. They call this day a Wedding Day – the day of his real union with the One he loved, the Divine. Every December Mevlevi dervishes come to Konya in Central Turkey to perform their mystic dance. Thousands of people from all over the world are filling up the old streets of Konya that still remember the teacher. There are still mosques and schools that he preached in. There is his Rose Garden given him by Alaeddin Keykubat, a Seljuk’s Sultan. There is Rumi’s mausoleum, now a Mevlana museum.

There, in the city he had lived, Mevlevi dervishes celebrate their master’s reunion with God through the whirling dance. For some, it is a very rare and exotic artistic performance. For others it is the sacred act of prayer, blessed by the holy spirit of the Islamic saint. But for everybody it is a beautiful memory about Rumi, whose humanity and wisdom still inspire people across the world.