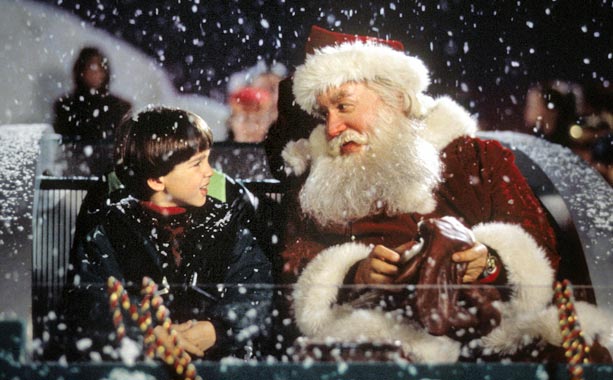 Santa Claus has a long history of being in the movies.  The earliest evidence of Santa Claus on the silver screen comes courtesy of the movie ‘Santa Claus Filling Stockings,’  a short film that shows St. Nick filling girls and boys stockings with toys from his sack.  These days movie Santas are more likely to be seen getting into a fist fight with a disgruntled shopper or hanging out in a bar.

From fat Santa to skinny Santa.  From real live actors to animated.  Here are the Top 5 Santa Claus Movies:

in Santa Claus is Coming To Town – Back in the 70’s Rankin-Bass cornered the market on stop motion holiday television specials.  In this show from 1970 Mickey Rooney plays the role of Kris Kringle, or, Santa Claus.  This Santa Claus had red hair, which was a little off putting.  The movie tells how Santa met his wife, oddly named Jessica, and how many Christmas traditions came to pass.

4.  Edward Ivory in The Nightmare Before Christmas – A small role, and an animated one at that, but Tim Burton’s 1993 classic featured a hearty, jolly version of Santa. Jack Skellington decides to take over Christmas and has three of his minions kidnap Santa and deliver him to the evil Oogie Boogie.  Santa manages to keep his cool and is freed by none other than Jack himself. 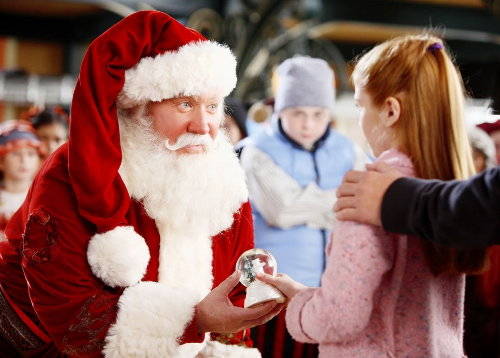 3.  Tim Allen in The Santa Clause – One of the most recent and most popular movie Santa Claus.  This 1994 movie has Allen playing an average man who accidentally causes Santa’s death on Christmas Eve.  It’s up to Allen and his son to finish delivering all the toys and then travel to the North Pole where he finds out that he must become the new Santa.  The movie was a box office success and led to two sequels, Santa Clause 2 – The Mrs. Clause and Santa Clause 3 – The Escape Clause.

2. David Huddleston in Santa Claus: The Movie – Huddleston plays an incredibly realistic Santa in this 1985 feature film.  It tells the story of a toymaker who accidentally discovers the North Pole and, in turn, becomes Santa Claus.  Hijinks ensue when Santa’s head elf heads to New York City and attempts to thwart an evil toy maker’s plans to take over Christmas.  As he always does, Santa saves the day.

1.  Edmund Gwynn in Miracle on 34th Street – The gold standard by which every movie Santa should be measured.  Is Santa real, or is he just trying to sell toys? In the 1947 version of the movie (we won’t discuss the remake) Gwynn plays a Macy’s department store Santa who has to convince a young Natalie Wood that he is indeed the real Santa Claus.  Gwynn went on to win the Oscar for Best Supporting Actor for the role.

Bonus Santa Claus – The cranky, fat, lazy department store Santa in 1984’s A Christmas Story.  When Ralphie tells Santa that all he wants for Christmas is a Red Ryder BB Gun he is treated to the oft repeated line, “You’ll shoot your eye out, kid.” Way to crush a young boy’s dream, Santa.

Santa Claus has been in the movies for as long as anyone can remember.  What better way to keep the holiday spirit and bring some of the magic home to you.