Scleroderma May Be Triggered by Cancer 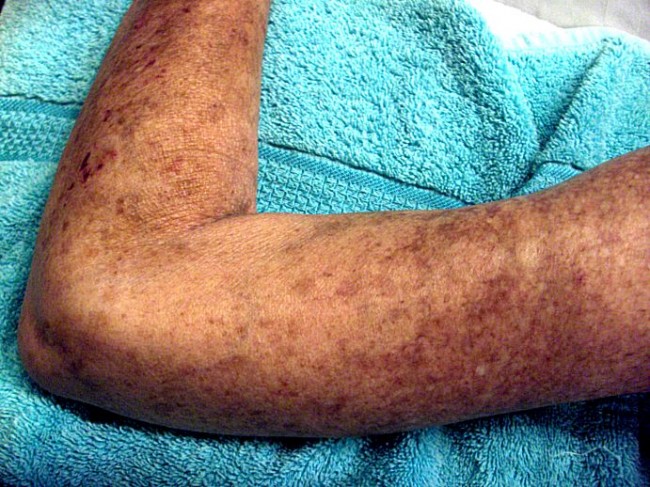 Johns Hopkins researchers say they have found a possible trigger for the autoimmune disease scleroderma:  cancer.

Scleroderma is a disease which causes the skin to become harder and thicker.  It can also lead to widespread organ damage.  It is estimated that it effects about 300,000 people in the United States alone.

Autoimmune diseases occur when the body’s immune system, which normally protects the body from germs and other outside invaders, fails to distinguish the body’s own proteins as belonging to itself and begins to attack them.  When this happens, the body begins to make antibodies against its own cells.  Special cells called T cells also fail to their job of keeping the immune system regulated.  The result is that the body begins to destroy its own tissues.

People with scleroderma tend to produce antibodies to a protein called RPC1.  These antibodies are what scientists believe is responsible for the organ damage that is seen in scleroderma.  However, scientists have not be able to determine what causes these antibodies to be produced.  The Johns Hopkins researchers believe they may have solved this mystery.  When they examined tumor tissue and blood samples from 16 scleroderma patients with various types of cancer, they found that the cancers in most of the  patients had a particular genetic mutation in a gene called POLR3A.  This gene is responsible for coding for RPC1.  When the mutation was present, however, a “foreign” form of the protein was produced, triggering a response from the patient’s own immune system.

Dr. Antony Rosen, who conducted the study, says that he believes these findings could change the way that doctors evaluate and treat autoimmune diseases like scleroderma.  Although it is necessary to have a normally functioning immune system in order to prevent many types of cancer, current scleroderma treatments are aimed at tamping down the disease’s immune response.  A better strategy may be to diagnose and treat the underlying cancer which is triggering the autoimmune response, he says.

Rosen also adds that their findings may prompt other research into cancer as a trigger for other autoimmune diseases, such as myositis and lupus.  It may also be that an immune response to other antigens besides RPC1 may be involved, he says.  Antigens are any foreign proteins which trigger an immune response.

In the past, scientists have speculated about many possible causes of autoimmune diseases – such as chemical exposures, infections and genetic factors – but nothing has really been proven.  Nor are any of these factors able to explain the cause of scleroderma, says Rosen.

Previous research did indicate that some with scleroderma were more likely to have cancer.  And, in the more severe cases of the disease, those with antibodies against RPC1 tended to develop cancer at the about the same time of their diagnosis more often than people who had other antibodies did.

Because of this previous work, Rosen and his co-author, Dr. Kenneth Kinzler, thought that the POLR3A gene’s encoding for RPC1 might have mutations which could trigger both scleroderma and cancer.

When Kinzler and Dr. Bert Vogelstein, who are co-directors of the Ludwig Center at Johns Hopkins, scanned tumor samples for the POLR3A gene’s DNA code in eight scleroderma patients who had both cancer and antibodies against RPC1, they found that tumors from six of these patients had mutations in this gene.  Also, all eight patients had developed cancer within either five months before their scleroderma diagnosis or two and half years after it.  This coincidental timing lead the men to suspect that the two could be linked.

According to Vogelstein, while newly-developed cancers are growing, the body becomes exposed to new proteins which are produced by the mutations in the cancer cells.  This exposure creates the potential for an autoimmune disease to develop.

In another eight patients, who did not have antibodies against RPC1, the scientists found no POLR3A gene mutations.  The patients also went on to develop cancers, but most of these occurred long after their scleroderma diagnosis.  In fact, about half of them did not develop cancer until more than 14 years later.

Other findings in the study included:

The scientists say that their findings also lend credence to a theory of cancer causation which states that everyone develops mutated cells with the potential to cause cancer.  However, through a process called immunoserveillance, the immune system is able to detect and kill these cells before they become full-blown cancer.  If this system fails, however, it is believed that this is when cancer develops.  According to the Johns Hopkins researchers, their study provides the first evidence in humans that this theory could be correct.

The study could also show why some people who are cured of cancer also see their scleroderma cured, the authors said.

The findings of the study were published on December 5, 2013 in the journal Science.