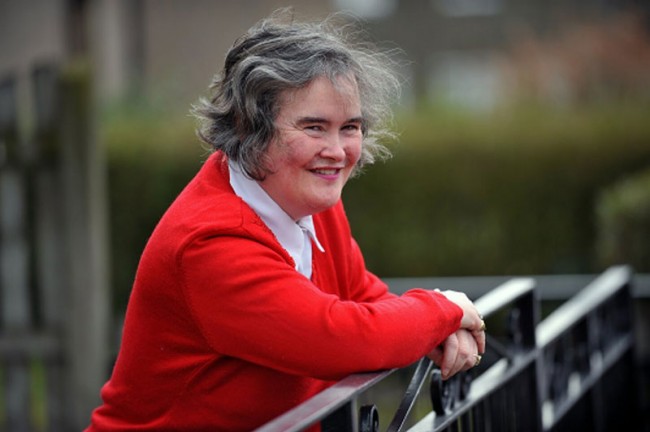 Susan Boyle has disclosed that she has Asperger syndrome, a high-functioning form of autism that affects social interaction. The world became familiar with Boyle through her audition in 2009 on Britain’s Got Talent, when she performed I Dreamed a Dream from Les Miserables. Little did she know that song would catapult her to fame. She has since sold 14 million albums worldwide.

In a Saturday interview with The Observer, Boyle, 52, confesses she always felt different. Doctors labeled her brain damaged at birth due to lack of oxygen. Her Asperger’s diagnosis came a year ago, but she kept quiet about it until now.

“I was told I had brain damage. I always knew it was an unfair label. Now I have a clearer understanding of what’s wrong and I feel relieved and a bit more relaxed about myself,” Boyle reportedly says.

When Boyle was growing up in Blackburn, West Lothian, in Scotland, a small industrial town, she was bullied by her classmates, who dubbed her “Susie Simple.” After years of struggling with depression and anxiety, and believing she had a more serious illness, Boyle chose to consult a Scottish specialist. After a series of tests, in which she learned she has above-average intelligence, Boyle was diagnosed with Asperger syndrome. She reportedly says she does not function well when she is alone, and requires the company of people around her. These days, she has a personal assistant and a manager.

Boyle reportedly says her mother, Bridget, was a great support system for her, encouraging her to indulge her creativity. In Blackburn, Boyle’s mother was formally acknowledged as Mrs. Boyle, not Bridget. Mrs. Boyle herself began painting at age 70. Unfortunately, she died before she could see her daughter become famous. Boyle lost a brother and a sister before her mother died.

About her mother, Boyle reportedly says, “Spiritually, she’s with me all the time. She has had a word with someone upstairs, because I wouldn’t have had this otherwise. There has been some sort of intervention in some way. I do feel that.” Her mother’s death was difficult, however, and Boyle evidently required intervention from social services for a period, as she reportedly says she was struggling emotionally, having been dependent on her mother for all sorts of support.

Despite her struggles, Boyle reportedly says the Asperger syndrome diagnosis will not affect her life in any significant way but says she hopes the disorder will help her fans and others treat her with more compassion and understanding.

Asperger syndrome is one of several autism spectrum disorders. Autism is generally characterized by repetitive behaviors, limited verbal and nonverbal communication skills, and poor social skills. Asperger syndrome is considered to be on the high-functioning spectrum of autism.

According to the U.S. Centers for Disease Control and Prevention, one in 88 children are diagnosed with an autism spectrum disorder. Autism affects more boys than girls, which accounts for the statistic of one in 54 boys being diagnosed compared with one in 252 girls.

The cause of autism is not completely known, but recent research points to the cause being due to a couple of possibilities: genetic predisposition and environmental factors, such as parental age, mother’s illness during pregnancy and lack of oxygen during birth. A combination of these can possibly cause autism, but researchers recommend that pregnant mothers ingest enough folic acid throughout the duration of pregnancy.