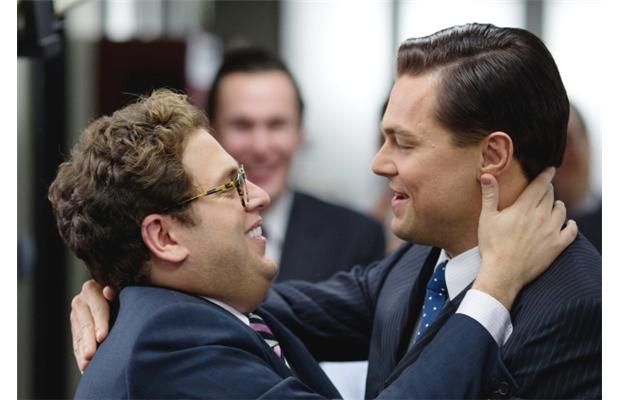 The latest Martin Scorcese movie, The Wolf of Wall Street starring Leonardo DiCaprio and opening December 25 in time for Christmas, is proof that greed is not only good, it can be fun — though, at a running time of three hours, it might tax the kidneys and attention spans of viewers to the max.

The Wolf of Wall Street is based upon the memoir by former Wall Street stockbroker Jordan Belfort, who ran a scam during the 1980s and 1990s that netted him and his employees billions of dollars — as well as an eventual jail sentence when the FBI caught on to his criminal exploits and bagged him.

Jordan Belfort definitely had fun, though, with his ill-gotten gains, while it lasted. The Wolf of Wall Street, with Leonardo DiCaprio (who is also the movie’s narrator) at perhaps his most entertaining best, is a look at the adrenaline rush and fun Belfort and his fellow cold-calling employees must have felt as they conned their investors and raked in fortunes.

Crime not only pays, but it pays very handsomely, if you’re a white-collar businessman intent on separating people from their money — though, if you’re caught, like Belfort was, a jail sentence might be in your future.

However, The Wolf of Wall Street depicts the exuberance, fun, drugs, sex, and feeling of power that comes with becoming exceedingly wealthy practically overnight. DiCaprio, in the role of Wall Street stockbroker Jordan Belfort, turns debauchery into a fine art.

Leonardo DiCaprio and the rest of the cast of The Wolf of Wall Street (Jonah Hill, Matthew McConaughey, Jon Bernthal, and Margot Robbie) bring the pages of Belfort’s memoir to vibrant and entertaining life in Martin Scorcese’s film.

DiCaprio, as Belfort, manages to rake in millions of dollars by selling penny stocks to gullible investors who believe every lie he and his employees tell them about their investment being an easy road to riches.

He and his employees are extremely successful, and The Wolf of Wall Street focuses on some of their more extreme moments of debauchery, including drug use, bringing a chimpanzee to the stockroom floor, tossing midgets at bulls eyes, having sex with as many women as possible, driving fast cars, and…even crash-landing a helicopter and sinking a yacht.

Jonah Hill, as Donnie Azoffm, Belfort’s partner in their criminal enterprise working for a company called Stratton Oakmont, is a funny addition to The Wall of Wall Street. He sports a funky curly Afro and buck teeth. Donnie, who is married to his cousin, wants a way out of his ho-hum dreary life, and he finds it working alongside Belfort, living the high life at the expense of their guileless investors.

As an article at Forbes.com reveals (you can read it below), the technique of telephone-iniated sales, or cold-calling, as depicted in The Wolf of Wall Street, is still a time-honored and effective one. Many honest (relatively speaking) salesmen use cold-calling, and companies rely on this technique to stay in business. It’s when it’s used by con artists, like Jordan Belfort, that has given cold-calling a bad name.

The Wolf of Wall Streetis rated R for its scenes of graphic nudity, strong sexual content and language, and drug use, so — suffice it to say — it’s not a movie meant for the kiddies or the entire family to enjoy.

In Wall Street, Michael Douglas as Gordon Gekko proclaimed that “greed is good.” Leonardo DiCaprio as crooked penny stock broker Jordan Belfort in The Wolf of Wall Street shows that greed can also be fun — until you get caught, anyway. With a running time of 180 minutes, though, it might be best not to get yourself the large size of soft drink before you sit down to enjoy the movie.

Recent trailer from The Wolf of Wall Street

The Wolf of Wall Street