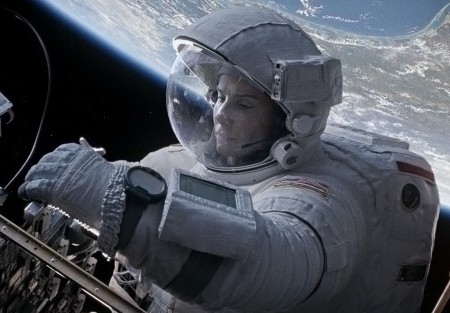 As the Academy Award nominees are listed, it is no surprise to see it includes the 2013 film Gravity which continues win honors at various award ceremonies. The latest being the 2014 Critics Choice Awards. While the Mexican director Alfonso Cuarón got the nod for best director for his space drama, his film walked away with quite a few honors by the end of the evening.

The Cuarón film nabbed best visual effects, cinematography and film editing and that was for work behind the camera. For her work in front of the device, Sandra Bullock earned the Best Actress in an Action Film Award. The 49 year-old film star described the movie as a concept that shouldn’t have worked, “but did.” Gravity also got Best Score

Alfonso’s movie also won Best Sci-Fi/Horror film. The Mexican filmmaker and his space thriller had company with another 2013 favorite, 12 Years a Slave. Directed by Steve McQueen with a screenplay written by John Ridley – based on the novel by Solomon Northup – the film won best adapted screenplay and like it’s competition Gravity picked up a couple more before the ceremony finished.

Best Film went to McQueen’s film and Best Supporting Actress went to 12 Years a Slave actress Lupita Nyong’o. But 12 Years a Slave did not pick up as many gongs as American Hustle. David O. Russell’s ensemble film, which won Best Acting Ensemble, got a nice round of awards that put it in the same league as Gravity and 12 Years a Slave.

Academy award nominees includes Gravity, which continues to win honors, but, it has had plenty of competition from other films. A lot of movies that have battled for awards against the space film have had their titles thrown into the same “Oscar hat.” Other films did get a few nods during the Critics Choice Awards. As well as 12 Years a Slave and American Hustle, Lone Survivor picked up an award for Best Action Film. Actor Mark Wahlberg also won for his work in the Peter Berg directed feature.

Hustle also won Best Hair & Makeup; Best Comedy and Best Actress, for Amy Adams. Interestingly enough, Hollywood miniature film mogul Martin Scorsese got quite a few nominations for his film The Wolf of Wall Street, but, only one award ended wound up going to the Leonardo DiCaprio film. Scorsese and DiCaprio have collaborated on a number of projects and this effort netted the actor Best Actor in a Comedy.

A highlight of the evening’s events was when award winning actor and director Forest Whitaker received the Joel Siegel Award for his humanitarian efforts. Oprah Winfrey presented it to the 52 year-old actor and filmmaker. Joel Siegel was film critic who worked on ABC’S Good Morning America show for over 25 years. Other individuals who have received the award include Sean Penn and Matt Damon.

Another highlight included the Louis XIII Genius Award being given to the romantic trilogy: Before Sunrise; Before Sunset and After Midnight. At least one more memorable moment took place when Matthew McConaughey won Best Actor for his portrayal of heterosexual AIDS sufferer Ron Woodroof in the film Dallas Buyers Club. Fellow Dallas Buyers Club actor Jared Leto also got the nod for Best Supporting Actor.

The Broadcast Film Critics Association, who host the Critics Choice event, and at 281 members is the largest film critic’s organization in North America, also honored actress Cate Blanchett for her work in the Woody Allen film Blue Jasmine. The announced Academy Award nominations includes Gravity which continues to win honors in award ceremonies running up to the all important Oscars. It remains to be seen just how many little statuettes will be nabbed by the space film.