By Roanne FitzGibbon on January 26, 2014Comments Off on Beatles Mark 50 Year Anniversary 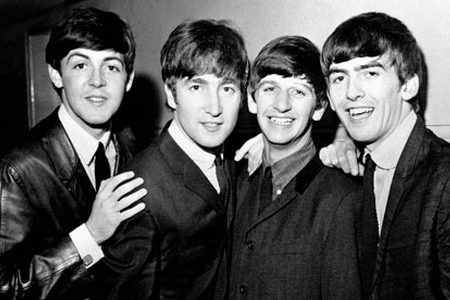 The Beatles will mark their 50 year anniversary, better known as the ‘British Invasion’, on Feb. 9.  In the meantime, the two remaining band members, Paul McCartney and Ringo Starr, have been busy accepting awards.  The Beatles are being recognized along with others at the 56th Grammy Awards with Lifetime Achievement Honors.  In a pre-ceremony that was held Jan. 25 in Los Angeles, Special Merit Awards were presented to The Beatles, Kris Kristofferson, The Isley Brothers, Maud Powell, Clifton Chenier, Kraftwerk and Armando Manzanero.

The annual Grammy Awards show is met with expectations and appreciation of all musical genres, recognizing outstanding artists and musicians.  The gala event is a night to remember with special tributes, as all of the honorees of Lifetime Achievement awards will be showcased.  McCartney and Starr are expected to be present, but may save performing together for their anniversary special.

As The Beatles mark the 50th anniversary of their debut on The Ed Sullivan Show, Feb. 9, 1964, McCartney and Starr have been preparing to tape a special event show.  The taped show will be aired on CBS on the anniversary date and will feature memories of the Beatles journey in music throughout the years.  Entitled The Night That Changed America: A Grammys Salute to The Beatles, it will surely be a must see for all fans of the famous and much admired group.

The Beatles simply began as a group of teenage boys who loved music and hung out together in the basements and halls of Liverpool, England in the early 1960’s.  The leader of the pack was guitarist John Lennon, who was quickly joined by Paul McCartney.  Several musical friends joined the sessions until the final blended group found their mix with George Harrison and Ringo Starr.  The group casually played at local pubs and such, eventually hitching a plane to the USA as the Fab Four in 1964.

The rest, you could say, is history.  Through smart management and connections, the Fab Four landed the ultimate gig with Ed Sullivan.  The host of the long-time talent show was so impressed with The Beatles, he headlined the group before an audience of screaming girls and millions more watching television.

Things took off from there with The Beatles embarking on a worldwide tour by the fall of that year.  The band of brothers in a way, spent each moment together composing, practicing and performing.  They hosted a slew of over 200 songs together, award-winning albums and several movies.  Their trends in hairstyles, ideals and dreams became the platform for many other bands to follow.  Merchandise such as t-shirts, mugs and posters were only the beginning of the craze that followed.

Success did not come without a price as the group rose to popularity, fame and fortune.  They soon learned they were not private citizens anymore, despite their own private dreams.  Honored by Queen Elizabeth II in 1965 and earning the MBE, only spearheaded the Fab Four into more public eye and speculation.  It was a first for an entertainment group to be recognized with an MBE.

The award, which stands for Members of the Most Honorable Order of the British Empire, had formally only been given to war heroes and the like.  Honoring four long-haired musicians was seen as a stretch at the time, but The Beatles had certainly put England back in the news.  Later, in 1969, Lennon returned his award, citing his disagreement with Britain’s involvement in the Vietnam War.  McCartney was later recognized in 1997 and duked as ‘Sir’ by the Queen.

Along the way, the members of the Beatles grew and explored their own options as musicians.  Creative forces and styles emerged as the band grew tense and weary.  It was time to move into their own musical ventures as the band split up in 1970.  To ease the togetherness they had shared at one time, the Fab Four cohesively wrote and recorded the classic Let It Be.  It was time to let it be and move on.

The break-up of The Beatles was sad, but led each band member on to his individual endeavors.  Relaxing with their own interests, marrying wives and spawning children, the group still had a lasting bond.  Exploring enlightenment, spiritual adventures and politics, each person had the power to voice his opinion to which people paid attention.  They were all popular from their beginning and the public listened and took note.

Disagreeing with Lennon’s philosophies on God and worldly possessions, a gunman took the life of the singer through a series of bullets on Dec. 8, 1980.  It was a very sad day, but one many reflect on through Lennon’s powerful words and music.

Just as music is a universal language, uniting people around The Beatles for their time collaged the diversity and acceptance of all people.  Despite their abhorrence of poverty, war and disease, the message of hope and love was always evident. In each of the individual musicians’ style and thoughts, they worked well as a group that led the world to new ideas.

George Harrison passed away in 2001 from lung cancer, but still remains a vital component of The Beatles with his contributions and inspiration.  His wife Olivia was on hand to accept the Special Merit Award of Lifetime Achievement, as was Yoko Ono, widow of Lennon.

As The Beatles mark their 5oth anniversary, years have gone by, changes have occurred, but the founding ideas and the splendor of The Beatles will remain throughout the ages.  It seems like Yesterday, as years have moved on in many stages, the heart throbs of yesteryear come full circle as we Let It Be what it was and what the music of The Beatles can still mean for today.