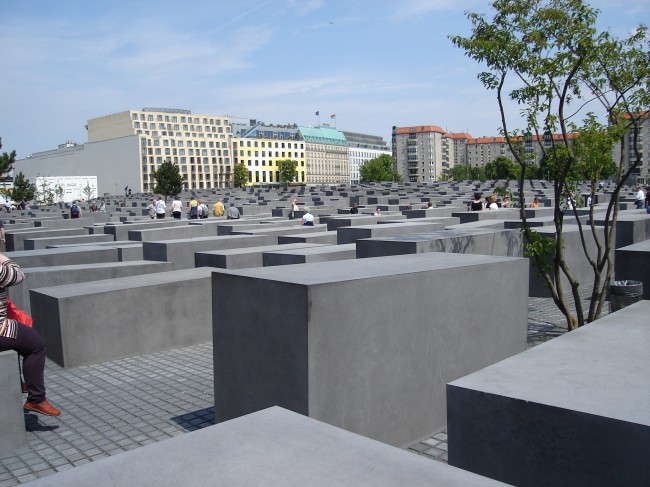 Outrage has been expressed amongst Berlin’s Jewish population after a video surfaced (included in this article), showing the desecration of the Holocaust Memorial by New Year revelers.

The design of the memorial, which consists of a series of concrete blocks, does make it particularly attractive to vandals and to others who think it might be a playground of some kind.

The video, which was uploaded to YouTube, shows drunken young men, partying at the Holocaust Memorial. It was reportedly taken by a journalist, right in the midst of the New Year celebrations as January 1, 2014 began.

Once the video surfaced on an Israeli news site this week, it caused sheer outrage from the Jewish community.

In the video, the party-goers can be seen jumping from concrete block to concrete block, setting off fireworks and worst of all, urinating on the memorial.  Others are seen lounging around on the concrete blocks in what looks like a drunken stupor.

Berlin police are saying that what was caught on video was “absolutely indecent and disorderly behavior” by the youngsters and the city is now considering upping security at the memorial site.

Naturally the Berlin Jewish population is also outraged over the desecration of the site of the Holocaust Memorial.

At present, the memorial is open to the public and is readily accessible from all sides.  A private security firm is currently contracted by the memorial foundation to watch over the site, but it looks like more security is now required.

According to Thomas Neuendorf, Berlin police press spokesman, the evidence of people disrespecting the memorial site has prompted them to review security measures, telling the media:

“After this incident the foundation will, together with the police, look into whether a more comprehensive security concept is necessary and which measures would be possible to prevent such occurrences.”

In the meantime, the existence of the video (which is included at the end of this article), is a constant source of embarrassment in Berlin.

Petra Pau, a member of the left-wing Die Linke party told the German media on Thursday that it is hard to understand why the desecration was only made public via Israel.  The Israeli media is reporting that the desecration was by members of a Neo-Nazi group.  However, this is not clear from the content of the video.

Pau added that better protection is definitely required to prevent this type of incident happening again.

The memorial’s proximity was, admittedly, a problem as it is close to the Brandenburg Gate, where a firework display is always held on New Year’s.  This draws massive crowds during the celebrations and has caused some security problems in the past.

The Holocaust Memorial and its underground information center were designed by Peter Eisenmann, a U.S. architect.

The “Central Memorial to the Murdered Jews of Europe”, to give it its full title, is made up of 2,000 concrete blocks of varying heights, laid out in a grid system and covering around 4.7 acres of the city.

The memorial was opened in 2005 and was dedicated to the six million Jews killed by the Nazis in Europe during World War II.  The memorial has become a popular attraction for millions of visitors to Berlin each year.

The current desecration of the Holocaust Memorial, however, has outraged the local Jewish population and it can only be hoped that security will be tightened to prevent such an occurrence happening again.