Campfire Kumbaya and Smores for Ancient People 300,000 Years Ago? 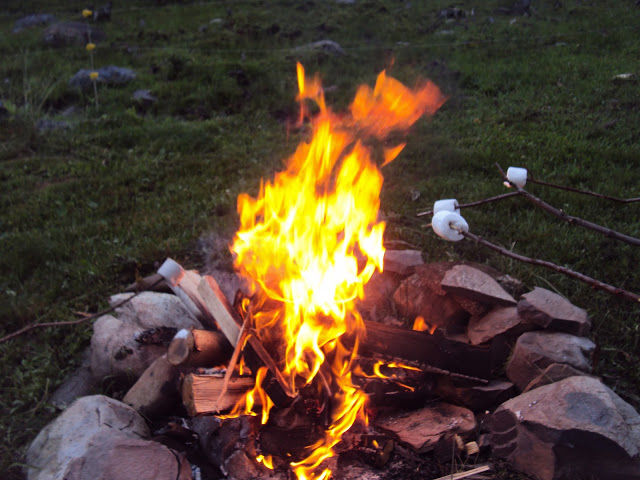 Did ancient people enjoy singing Kumbaya and roasting delicious Smores around the campfire 300,000 years ago? While they might not have had quite the same word for “come by here” as the traditional word kumbaya means and they almost certainly didn’t have processed marshmallows to make a modern day version of Smores, ancient people did have campfires where community members would gather repeatedly, according to a new study published in the Journal of Archeological Science.

The study sheds light on a common question among researchers regarding when human ancestors began to use fire regularly and for what exact purpose. Scientists working at Qesem Cave in Isreal made the discovery of a hearth that was used for gatherings among ancient people. This particular campfire, say scientists, was surrounded by various tools and instruments that indicate people would gather around the area for a variety of activities such as cutting meat and processing animal hides.

The hearth is six and a half feet across, and is considerably larger than previously uncovered similar areas, weaving a picture for scientists which differs from prior information about ancient community fire use. The study explains:

The hearth covers ca. 4 m2 in area making it a uniquely large hearth in comparison to any contemporaneous hearth identified thus far, possibly indicating it has been used by a relatively large group of people.

While the guess that early humans sang songs like Kumbaya or crafted delicious Smores desserts around their campfires 300,000 years ago is nothing more than a playful stretch; the discovery of the hearth does tell scientists that humans’ ancient ancestors were a bit more like their modern counterparts than previously thought.

Researcher say the new finding can help them further understand the social structure and organization of humans’ ancient ancestors, and like modern humans, the ancients preferred to gather in groups to perform essential tasks. The comparison could be made that gathering around an ancient hearth to work on hides is much like a modern human going into a group setting such as an office today.

Previous research on early humans’ use of fire has shown that intelligence was a key factor in determining the continued use of community hearths. A study published last year showed that human ancestors needed a remarkably high level of cognitive ability to not only start fires, but to keep them going and to return to hearths repeatedly to participate in group or household activities.

Early humans using fire needed to understand that food had to be cooked before it was eaten, and they also had to have some way to ensure that no other member of their community would steal fire, food or tools. Further, the organization of the areas around this recently discovered hearth indicates a relatively complex social hierarchy. Anthropologist Terrence Twomey explains, “Early humans would have had to have been fairly clever to keep a fire going by cooperating, not stealing food or not stealing fire from other people.”

Did ancient people sit around the campfire, hold hands, sing Kumbaya and make Smores 300,000 years ago? No, not in the way modern humans would today, but the recent discovery unearthed in Israel tells scientists that the ancients were more like modern humans than previously thought; that they did gather around the campfire, organize into groups, cook and work together, and have definite a social structure.