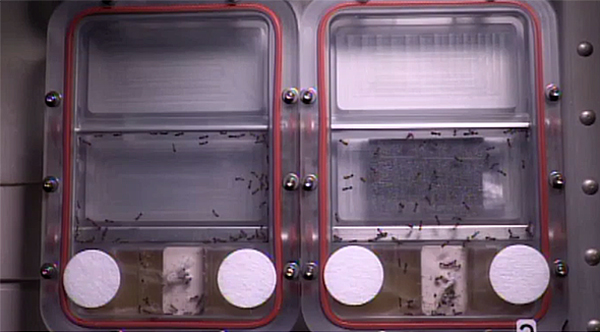 NASA has made the International Space Station the newest site for observing the functions of 800 ants in space colonies. The common black pavement ants made the ISS their new home last week. An unmanned private cargo ship, Cygnius, made the voyage to the space station to deliver Christmas gifts along with the ants.

Orbital Sciences Corporation launched the Cygnius on Friday, January 9, 2014. It is on its first mission carrying supplies to the space station for NASA. Included in the ride along with the ants there was fresh fruit and 2,780 pounds of gear for the astronauts. The gear consisted of items needed for important science experiments and essential provisions for the crew. These unmanned supply rockets are also known as Doves.

The experimental ants are the design of a biologist from Stanford, Deborah Gordon. She is determining how the ants react and adjust to their new environment. Loss of gravity could affect the interactions of the ants and their ability to correctly make judgments.

The University of Colorado at Boulder has a Bio Serve Space Technologies Center. They are also in partnership with NASA on the ant project. Stephanie Countryman is the Bio Serve Director of Education and Business Development for CU Boulder. She has said that the movements of the ants and functioning abilities in space will be compared to the ant projects available in the classrooms of students from elementary school through high schools worldwide.

The behavior patterns of the ants will be used to create flexible robots. These robots would have the ability to go into buildings and handle various situations that would be considered unsafe for and extremely dangerous to humans. NASA is hopeful that the abilities of the ants will offer solutions and ideas for solving any future problems with network design systems.

There are eight separate colonies. Each one of these holds one-hundred ants. The ants arrived on the space station in small chambers. Cameras will monitor the movement of the ants and how they adapt. NASA will be observing the 800 ants adapting to their eight separate colonies in space. The images from these observations will be sent back to earth for assessment.

Ants do not rely on one main control focus. They work with whatever information is available to them nearby. Along with the rest of the group, ants coordinate their actions to arrive at a given behavior for the entire colony.

The ants work together. They determine how many other ants are in their general area. This provides them with the clues they need to know which direction to move in. Sometimes their movement is in a straight line. Other times their movement is in circles. How the ants make this united movement happen will be helpful in creating robots that can also work in these creative formations.

The project had been delayed several times due to weather conditions. A strong solar storm also contributed to delays. Emergency repairs played its part in having to wait until the January 9 departure date. All of these problems were solved and NASA is now observing the actions of the 800 ants in their respective space colonies.