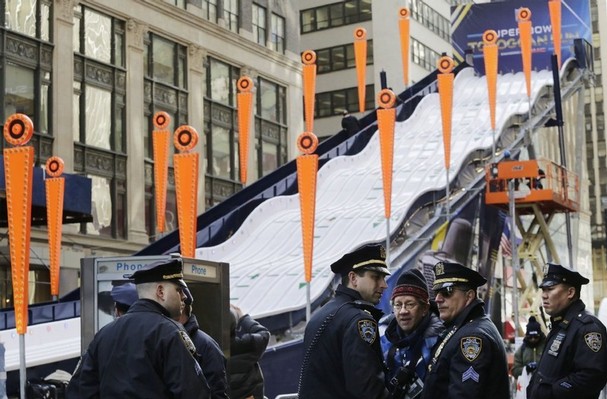 New York City opens its Super Bowl Boulevard today; the attraction covers 13 city blocks from 34th and Broadway to 47th street. Fans can ride the 60-foot Toboggan Run in Times Square, watch a 3D movie, and enjoy nightly concerts as well. The attraction also allows fans to get a photo in front of the Vince Lombardi trophy and see a huge illuminated statue that reads XLVIII in large letters.

Visitors can also meet National Football League stars at the NFL Shop, which is located on the fourth floor of the Macy’s Herald Square at 151 W. 34th Street. The line-up starts at 1 p.m. with Areneas Williams, a former player for the Arizona Cardinals and St. Louis Rams, then Osi Umenyiora, the defensive end for the Atlanta Falcons and New York Giants will be at the shop at 3 p.m. Wayne Chrebet, who grew up in Garfield, New Jersey, and the former wide receiver for the New York Jets will end the star-studded meet and greet at 4 p.m.

The fun will not only be happening during the day; tonight fans can enjoy concerts at both the Roman Numerals Stage located at Broadway and 43rd Street and Super Bowl Boulevard stage at Broadway and 40th street. At the Roman Numerals Stage at 6 pm, the Boys Choir of Harlem will perform as well as the cast of Jersey Boys and the Rockettes. Then at 7:30, at the Super Bowl Boulevard stage, the cheerleaders of the New York Jets Flight Crew will perform and the Bacon Brothers will close out the night at 8:30 p.m. Visitors can also visit the Huddle Shuttle at 35th and 36th streets to enjoy interactive football related activities, look at football memorabilia and watch a multi-sensory LED video about New York.

New York City will open Super Bowl Boulevard today and run the attraction until February 1st; fans can visit it from 12 p.m. to 10 p.m. The fun doesn’t stop at the attractions; fans can also watch the official Handoff Ceremony at the Roman Numeral Stage on Saturday, hosted by the New Jersey and New York Host Committee. The ceremony commemorates the next location of the Super Bowl in Glendale, Arizona. Rodger Goodell, NFL Commissioner, Bill de Blasjo, the mayor of New York and David Tyree, former wide receiver for the Giants will be at the commemoration.

Aside from the beginning of Super Bowl Boulevard in New York City, two other events were held earlier this week. On Monday, the Super Bowl Kickoff Spectacular was held; the event was thrown by the Host Committee and Macy’s. It included performances by the Goo Goo Dolls, The Fray and Daughtry. The night ended with Macy’s world-famous fireworks display and was held in Jersey City, New Jersey, at Liberty State Park. Media Day occurred on Tuesday; this day was held at the Prudential Center presented by Gatorade in Newark, New Jersey, and allowed fans to watch players from both Super Bowl teams talk to members of the media.