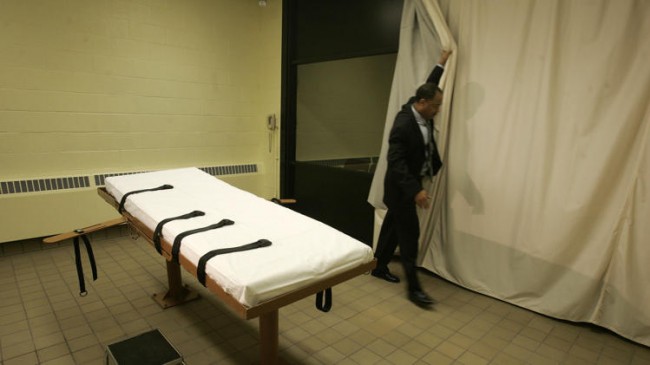 An Ohio execution has made use of a new drug combination due to European drug manufacturers refusing to let U.S. prisons use their drugs in lethal injections.  Alternative new protocols were being explored, particularly after the current supply of pentobarbital dried up in September.

Condemned inmate Dennis McGuire faced death as a result of his 1994 conviction for the rape and murder of pregnant 22-year-old Joy Stewart.  She was seven months pregnant at the time of her death, and when she was found by hikers, her throat had been cut and she had been sodomized.

The IV-administered drugs in the Ohio execution included midazolam, a sedative, and the painkiller hydromorphone, according to the Ohio’s corrections department. While lawyers for the prosecution argued that there should be no comfortable death when it came to execution for a capital crime, McGuire’s attorneys argued that the killer would die in agony and terror as he suffocated.  Director of the Death Penalty Clinic at UC Berkeley, Elisabeth A. Sernel, said that no one could really know what the process that McGuire went through would be like.

A pool of journalists at the execution said the man made several snorting and snoring sounds during the 15-minute process.  McGuire’s adult daughter Amber looked on, horrified, and the family that did appear were visibly shaken and crying, according to reports.

Midazolam is a sedative traditionally given to patients before they undergo surgery.  Hydromorphone is a painkiller more potent than morphine on a per milligram basis.

The Ohio execution, in using a new drug combination, has caused an eruption of controversy, as it is a drug combination never before tried since Ohio reintroduced the death penalty in 1999.   There were significant concerns that McGuire would go through unnecessary suffering as he was put to death.

McGuire appeared to wave to his family as he was strapped to a table.  He thanked the Stewart family; the condemned man apparently received a letter from the family prior to his final walk.  He also told his adult children that he loved them, a statement that was audible even though the microphone had been taken away from him.

The Stewart family said while they had forgiven McGuire for his actions, he needed to pay for what had been done.  Judge Gregory Frost said the new combination of lethal drugs was used as an experiment in this case and ordered everyone involved to take photographs of the execution and to box the syringes and other medical equipment involved.

In the moments before McGuire’s execution, state prison director Gary Mohr expressed his confidence in the method of execution.  He noted that he was sure the execution would occur in a dignified manner.

McGuire’s attorney, federal public defender Allen Bohnert, said that Ohio should be disgusted with the manner in which McGuire died.  He did not attend the execution, but had expressed his concerns many times about how McGuire would die.

McGuire had attempted to gain a reprieve, as another inmate had done, for the sake of donating his organs.  An inmate had submitted a request to donate his kidney to his sister and his heart to his mother, and the prison granted him eight months in order to study his request.  As McGuire could not identify any one family member to receive his organs, his request was denied.

The Ohio execution that has used a new drug combination is likely to be among the first of many states who still uphold the death penalty, as many states will face the same sorts of drug shortages in lethal injections.