Pete Seeger Is Dead at 94 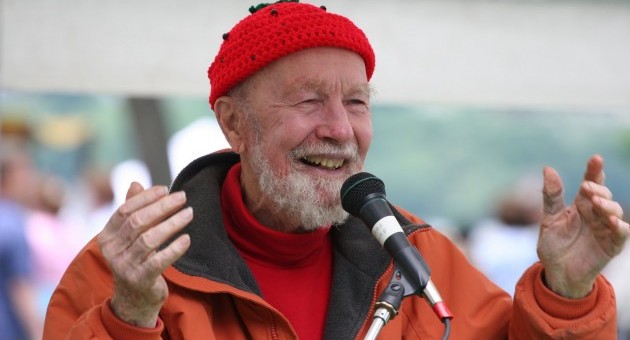 The world lost another great last night as folk legend Pete Seeger is now dead at 94. Seeger is best known for his writing, resuscitation of the folk genre, and inspiring rallies and performances that helped encourage greats like Bob Dylan and Bruce Springsteen to pick up their guitars and pens.

After having been in hospital for six days, Seeger’s death came peacefully at 9:30 p.m. on Monday. He was asleep at the time of his passing and his family was with him as well. His grandson, Kitama Cahill-Jackson, confirmed his passing.

Seeger’s undeniable music influence can be seen the world over. Although never topping the charts like The Beatles did, Seeger was far more influential than most artists in terms of activism and live performances.

As a prominent political figure, Seeger’s controversial and consistent views made him a staunch figure in connecting folk music with left-wing political theories. With almost 7 decades of work and influence, his passionate songs and performances affected union rallies, the civil rights era, environmental causes, and pacifist messages.

However, the folk artist’s political views also landed him in some hot water over the span of his life. As a member of the American Communist Party, Seeger found himself blacklisted during the fifties which made him resort to exhaustive, low-key work just to be self-sustaining. Regardless of criticism against him, Seeger never changed his views. It was not Pete Seeger’s way to give in and be dead in the water when the going got tough, which is likely a major part of why the 94-year-old man found such success and even legend-status after his blacklisting.

As both a soloist and band member during his life, Seeger had achieved many notable feats. As a member of The Weavers, he and band mates Ronnie Gilber, Lee Hays, and Fred Hellerman made names for themselves through their tight harmonies and creative lyrical work. Their version of “Goodnight Irene,” went on to sell two million copies in 1950 alone, reaching the top spot on the US pop singles chart that same year.
On his own though is where Seeger truly shined. His works and contributions include “Waist Deep in the Big Muddy,” “If I Had a Hammer,” and “Turn! Turn! Turn!” among many other folk classics. His unparalleled pioneering in the folk genre along with his unique and vibrant performances changed Western culture irreversibly.

And Seeger was a performer through and through. Some suggest that everyone who has had campfire singalongs owes a debt to him. Seeger also made some of the first truly successful audience singalongs at his concerts and popularized the “hootenanny,” – essentially a meet up of folk musicians to share their work one by one. With countless benefit and activist concerts as well, he never seemed to lose steam. In fact, Seeger played at President Obama’s 2009 inauguration ceremony, and even made an appearance at Occupy Wall street protests in 2011.

For all of the heartwarming ballads and performances Seeger brought us, it is no wonder why he was recognized as a legend time and time again. His work and influence will all but certainly live on both musically and in the realm of political activism. For those still curious as to why he had such success, consider this: according to his grandson, the 94-year-old man was out chopping wood just 10 days before being found dead in his hospital bed. And it is that indomitable spirit and work ethic that has helped cement Pete Seeger as arguably one of the 20th century’s greatest musicians.