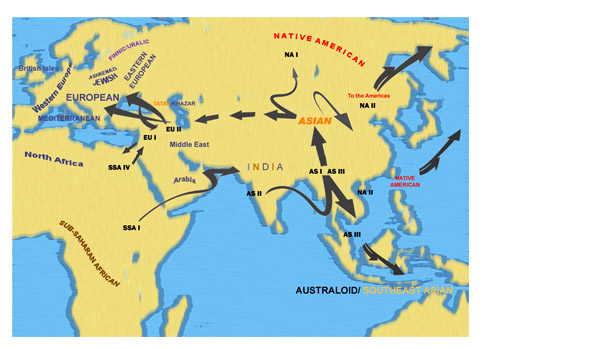 A recent study that has come out in the journal Nature reads that prehistoric DNA material found in a tooth from a skeleton was found in a deep cave system in Spain back in 2006, has revealed that he had an extraordinary mixture of dark skin and blue eyes. Europeans that came from the Mesolithic period around 7,500 years ago, when this man would have lived, were thought to have been light skinned already because of the very small ultraviolet radiation levels which existed at those high spaces.

One of the study’s main author’s, Carles Lalueza-Fox, who worked at Spain’s Evolutionary Biology Institute, stated that up to now, it had been assumed that light colored skin had evolved quite early in Europe, probably during the Palaeolithic period, but this is obviously not the case. By studying the DNA, it shows that this person had African variations for the coloration genes.

The Palaeolithic period lasted from approximately 55,000-10,500 years ago, and was then followed by the Mesolithic period that lasted to around 5,000 years ago, and that was by the Neolithic period. Lalueza-Fox stated that it appears Europeans with light skin came on the scene much later in history than what was once thought to be. They may have appeared only in the Neolithic age when gatherers and hunters started to become farmers. The cause could have been brought on by an alteration in diet and there being less of the intake of vitamin D which would have come with such a lifestyle transformation.

When there is no natural vitamin D, the human skin is able to make its own when it has contact with the sun, but dark skin synthesize far less than what fair skin does, generating an evolutionary motivation for the change to occur. In the DNA of the skeleton that was discovered, Lalueza-Fox and his group also discovered the genetic signature for blue eyes and dark hair together. Even though the precise skin hue was unable to be determined, the scientists stated that this certain combination with blue eyes was not found in any Europeans in today’s time.

It was extensively accepted that Man’s oldest mutual forefather had dark skin, and that people became light skinned as they moved further to the north from Africa into climates that were colder and received much less sunlight. Succeeding immigrations and mingling began to create the huge range of skin hues that exist now. The skeleton, which was discovered in Spain in 2006, has been the very first European hunter who had his DNA completely sequenced. After it was compared with modern humans DNA, it was discovered that he was found to be the closest genetically related to northern Europeans such as Fins or Swedes.

The analysis also discovered that the ancient gatherer had yet to acquire the genetic transmutation which would allow later human beings to be able to digest milk and starch. This would be an evolutionary trait that most likely overlapped with the arrival of the agricultural age in the Neolithic period. The research study authors explained that there would have to be more Mesolithic genomes investigated before they could determine just how extensive the prehistoric man DNA traits really were.

The recent study shown that DNA in the tooth of the prehistoric man, whose skeleton was found in a deep cave system in Spain back in 2006, that he had an extraordinary mixture of dark skin and blue eyes, and this is an amazing find.