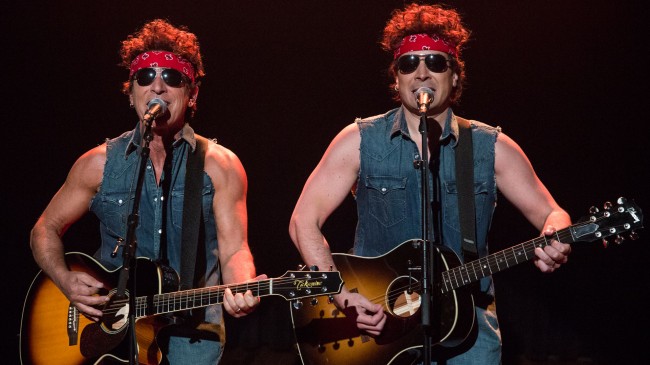 Bruce Springsteen has never shied away from making political stances, so when a news story ran earlier this month implicating the governor of Springsteen’s home state of New Jersey, in political scandal most fans knew that they would hear a comment or two from the man they call “The Boss.” They just might not have known he was going to do it with Jimmy Fallon on his late night talk show by singing a hilarious parody of his mega-hit Born to Run.

For those that don’t know already, Born to Run is the story of hopeful youngsters ready to make it out of New Jersey and into the big time, possibly New York City. Who knew that they were going to take the George Washington Bridge?

The video opens with Fallon dressed up as Bruce circa 1980, complete with a sleeveless jean jacket, a red bandana, aviators and long curly hair singing in Springsteen’s trademark gravely tone.

“In the day we sweated out on the streets, stuck in traffic on the GWB. They shut down the tollbooths of glory because we didn’t endorse Christie,” Fallon sings as the crowd laughs.

He went on with his insightful parody of Born to Run singing, “Maybe this bridge gate was just payback, it was a [expletive] slap to the state Democrats. We got to get out but we can’t. We’re stuck in Gov. Chris Christie’s Fort Lee, N.J., traffic jam.”

Fallon’s singing parody was a spot on rendition of Springsteen. He even got the Boss’s trademark “Yeahs” down pretty good. Fallon is no stranger to impersonating great rock and roll singers though; he has also done a very rendition of Willow Smith’s Whip My Hair as Neil Young. For those that want to see more Fallon and Springsteen magic, Bruce appeared in that video also.

After those verses, Springsteen himself came on stage dressed in the same attire as Fallon. The two shared a moment as Springsteen nodded his approval of Fallon’s rendition, then Springsteen turned to his own mike for his part of the song.

“Governor let me in I want to be your friend .There’ll be no partisan divisions,” he sang to cheers from the audience. “Let me wrap my legs around your mighty rims, and relieve your stressful condition.” He then raised his voice for one of the songs emotional climax’s which saw Bruce re-imaging Born to Run with Wall Street executives and truckers pitted next to each other.

Then Bruce sung the chorus to the new rendition of Born to Run which is sure to be a hit for all of those who had to sit through the horrible track on those four days in September. “I’m stuck in Governor Chris Christie’s Fort Lee, N.J., traffic jam.”

After an acoustic guitar solo, Fallon and Springsteen traded lines on the very emotional and very hilarious third verse.

Springsteen has a new album, High Hopes, which was released on Tuesday. Chris Christie is still under investigation for the role that he played in the closing of lanes on the George Washington Bridge in September. Until we know more at least we have Jimmy Fallon and Bruce Springsteen making a mockery of Governor Christie set to the tune of the Boss’s immortal New Jersey classic Born to Run.