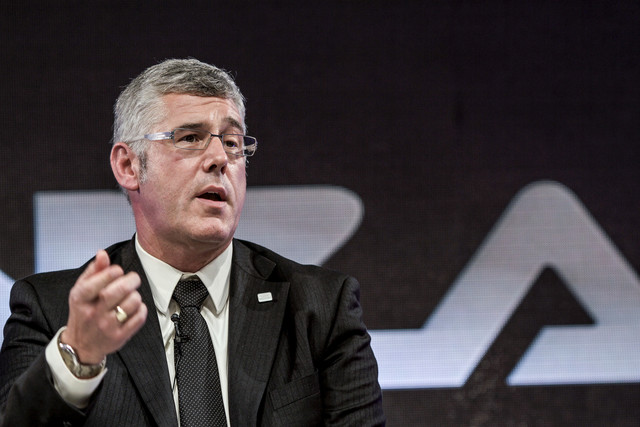 Tata Motors, the Indian automobile giant has lost its Managing Director, Karl Slym when he died in a tragic accident in Thailand, on Sunday. The 51-year-old Slym joined Tata Motors, Inc. in 2012 in a bid to improve sales and the company’s declining share of the nation’s rapidly growing auto market. He is said to have fallen from one of the upper floors of the Shangri-La Hotel in Bangkok while in Thailand to attend a board meeting of Tata Motors’ operations in the country. He is survived by Sally, his wife of three decades.

The Tata Motors MD had been overseeing critical areas of the company’s strategy in Asia during turbulent times. The auto manufacturer suffered significant setbacks in India’s burgeoning automobile market that boasts of a turnover greater than $60 billion with exports of over $9.3 billion in 2012-2013. The company’s acquisition of Jaguar Land Rover was a shot in the arm offsetting a poor showing in the domestic automobile market. Domestic sales saw a drop of 29 percent but exports and the sales generated by international brands had helped boost revenues.

Karl Slym was the second high-level executive to be tasked with reviving Tata sales in India, a country that is beginning to enjoy the quality of Korean, Japanese, German and American brands at lower prices. Carl-Peter Forster, formerly of General Motors stayed with the company from 2009 through 2011. The Managing Director’s tragic death due to an accident at a Bangkok hotel leaves a large lacuna in Tata Motors that the company’s management will seek to fill sooner than later.

Under Slym, the company reaped the benefits of its acquisitions by reviving the uncertain fortunes of Jaguar and boosting sales in Europe and Asia. Cyrus Pallonji Mistry, Chairman of Tata Motors praised the British-born executive as “a valued colleague who was providing strong leadership at a challenging time for the Indian auto industry.” Karl Slym’s work at Tata Motors included more than boosting sales outside of India, but to improve the sales of cars such the vaunted Nano that failed to make a mark despite a $2,300 price tag. Shortly before his death, Slym had successfully positioned the Nano as a second family car. He was also focused on showcasing the global strength of the company by introducing India’s first turbocharged petrol engine.

Managing Director Karl Slym’s accidental death in a hotel in Bangkok while on an official visit to the Tata Motors’ Thailand office, is expected to have a serious impact, unless a successor is quickly appointed. Mr. Slym brought three decades of experience gained from long tenures with Toyota and General Motors to his job at Tata Motors. He was an integral part of the Indian auto manufacturer’s plans to revamp its presence in the volatile Indian auto market. Vikas Sehgal, the automotive sector MD of Rothschild & Sons said “Karl was beginning to make long-term changes at Tata Motors.” Condolences and praise for Slym have continued to pour in from colleagues and former associates from around the world, as the Tata Motors family mourns the loss of one of their brightest stars in recent years.