The Nerd Machine is a ‘Nerdolution’ for Zachary Levi

By Jim Malone on January 11, 2014Comments Off on The Nerd Machine is a ‘Nerdolution’ for Zachary Levi 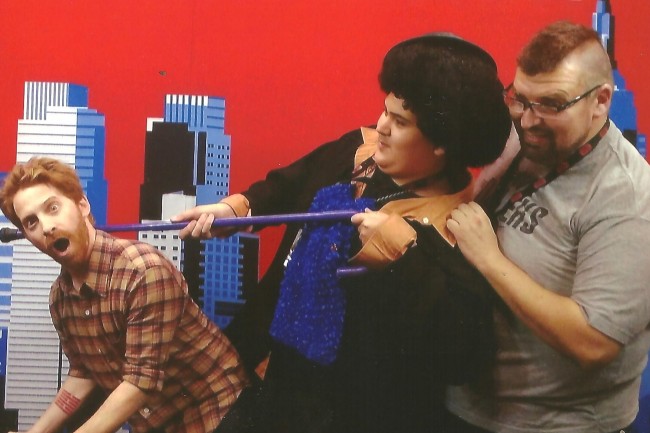 “Viva la Nerdolution!” It is the slogan for The Nerd Machine, a community founded and fostered by film star Zachary Levi. It is a charitable group, raising money for charity world-wide. The image in this article was obtained by donating to Operation Smile, an organization dedicated to providing cleft lip and cleft palate surgeries for the impoverished and overlooked children of the world. It is the primary charity of Levi’s group.

At the Nerd Machine booth, during the New York Comic-Con this past fall, the name of Zachary Levi commanded a host of celebrities willing to donate time taking pictures with fans in exchange for a donation to the charity. While the charitable aspects of this group are a huge part of its identity, the organization is a community, and it is much more now than “just” a charity. It is a community of believers in the power of nerds to change the world. As it turns out, the “revenge” of the nerds is that being a nerd is cool now. The internet, and the ability to instantly connect with a world of allies and fellow-outcasts, has more than overcome mere social awkwardness. This is a group that is taking the world by storm, and not apologizing for anything. This is a generation of nerds that got around to doing the math.

“There are more of us than them,” one man in a Green Lantern costume said, “so why should we act like we are embarrassed by who we are?”

The Nerd Machine community has a new perspective. With high-profile nerds like Zachary Levi and Seth Green enjoying such public success, there is a whole new perspective on “nerdliness” in the world. By working together with Operation Smile, a new generation of young people is able to see the impact they can have in the world by joining together and boldly asserting the strength in numbers that the ability to connect on the internet has provided. It is a whole new world, and bullies are becoming irrelevant. “Viva la Nerdolution” means empowerment to change the world for Zachary Levi and the members of The Nerd Machine.

Green was one of the most popular celebrity guests, engaging every fan and encouraging them to get unique pictures for themselves with him. Also appearing at the New York event was Arthur Darvill, of Doctor Who fame. His line was so long that he ended up staying well beyond the allotted time slot in order to get all the waiting fans in and raise as much money as he could for the cause. There is a feeling of family among members of the community, and they look to The Nerd Connection on Google+ for their daily “nerd news” and events. They have created a de-facto news outlet for the nerd community that is powered by mutual respect and acceptance. They make friends, share news and events, work together and support each other’s projects all by way of the charitable community that Levi founded.

With the momentum this “nerdolution” has created, the next generation of nerds is not timid or unsure of themselves. They are a fully functioning sub-culture which has caught the attention of marketing executives and made them take notice. They know enough to ask for what they want from the world around them. Rubbing shoulders with superstars who come and “hang-out” at the booths, a new attitude is emerging. While recognizing and appreciating the work of their celebrity supporters, they are more impressed by exhibitions of charity and generosity. They are connected and inter-connected, and are fully aware of the power they hold as a constituency. More so than fame and notoriety, this growing nation of nerds honors the unique and different above all else.

The New York Comic-Con is one of the largest events of the year in the city, and every company that has an eye on the nerd dollar is in attendance. Everyone from car insurance companies to micro-breweries find an angle to lure this audience to their booths. A stretch or not, the buying power that this demographic represents is impossible to resist. The fact that Levi and his fellow nerds have taken that strength in numbers and turned it toward major worldwide charitable impact speaks to the heroic nature of the group. Zachary Levi and his Nerd Machine friends prefer to use their power for good instead of evil. Viva la Nerdolution!”