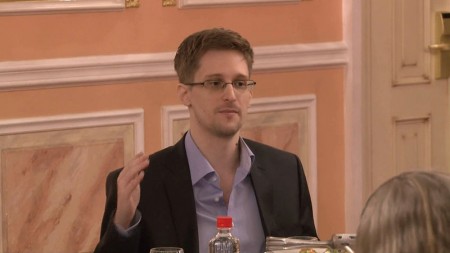 Amid public distrust, the US now gives Edward Snowden a gesture after a major backlash from the public over revelations about how the NSA conducts its business, reports indicate. Officials are reported to be ready to “talk” with Snowden and offer a plea deal. However, Snowden might not feel their gesture is genuine at this late stage in the game. Snowden enjoys wide public support from free speech and privacy advocates, especially online. According to People’s World, Snowden held a Question and Answer session on Twitter, a popular social media site.

Questions about surveillance, the usefulness and morality of spying itself and the recent statement by the Privacy and Civil Liberties Oversight Board were among the questions from users on Twitter following the hashtag, #AskSnowden. Snowden discussed his opinions on these matters and even made a case that traditional surveillance operations were justifiable, but that mass surveillance was not acceptable. He spoke of keeping this power in check by holding those with power accountable. He explained that national values trump misguided laws.

Snowden has been a trending topic online and in traditional media since his name appeared alongside news of leaks that revealed details about how the government, through use of the NSA spy program, was amassing loads of information from American citizens’ personal phone data. Privacy and civil liberties groups were enraged and unified. The Electronic Frontier Foundation (EFF) and American Civil Liberties Union (ACLU) were among those that assembled to oppose the NSA program. Now the U.S. gives Snowden this gesture after a buildup of media attention, public outcry and backlash from big tech and service provider companies who are pressured to give up the data pipeline or face intrusion.

Agence Presse France (AFP), a newswire, reported that Snowden doesn’t believe he will face a fair trial in the U.S. Indeed, Snowden’s character has been embellished as a hero and slandered as a traitor. Others simply refer to Snowden as a whistle blower. Snowden even referred to a 100-year-old law that would prevent him from arguing a public interest defense. Snowden said the whistle blower law that exists does not provide protection for national security contractors and that Congress should consider providing laws that protect all whistle blowers regardless of employer or work status.

There is no doubt that Snowden has the advantage of some public support, media attention and distrust of the government (particularly the NSA) on his side. President Barack Obama is feeling the heat and has addressed the public announcing changes. According to a recent national survey, nearly 75 percent of Americans do not believe Obama’s changes will increase protection for privacy. The Pew Research Center survey also noted that 79 percent of respondents did not believe the changes would make any difference in the government’s ability to fight terrorism. However, the study also suggests that most feel that Snowden should be charged as a criminal for his actions of leaking classified information as a contractor for the CIA. AFP reported that officials said they would talk if Snowden admits wrongdoing but would not grant clemency. The U.S. gives the impression by this gesture to Snowden that they want to resolve the issue after the public NSA backlash, but on their terms.

Pew Research Center for the People and the Press