The ICC Under-19 Cricket World Cup  has seen a  brilliant performance from the Afghanistan side, which beat Australia  by 36 runs in the United Arab Emirates today. Australia now needs to beat Bangladesh if they are to remain in the competition.  It is fair to say it was a result they were not expecting, and there is a real possibility now they may not qualify.

To say that Afghanistan was the underdog is not putting too fine a point on it. The fact that the young players from the country so  long besieged by war got this far is quite staggering. These juniors now follow the country’s senior team in success.

Afghanistan qualified for the next World Cup in 2015  last  year by winning against Kenya. They had only been playing the game for 12 years since the fall of the Taliban. Back in war-torn Afghanistan, the crowds went wild as the news came through. Kabul only has one stadium, where supporters had gathered to watch the broadcast; there were gunshots and  dancing upon hearing of the triumph of Afghanistan over Australia.  The game showed its unifying power as Pashtuns, Hazaras, Tajiks and Uzbeks all joined in the  celebrations.

The coach for the  Afghan senior team, Kabir Khan, the former fast bowler for Pakistan, said the youngsters  were getting used to the pressure and beginning to enjoy themselves.  He sees them adapting to the pressure and not attempting to push against it,which can be a fault in amateurs.  They showed steel and tenacity in this cricket game, even as the Australians gave signs of coming back after a shaky start.

Graeme  Hick, the coach for the Aussie Under-19s, had to take his hat off to the Afghan boys.  He admitted that they played well and put his team under pressure from the get-go.  Afghani Captain Nasil Jamar was thrilled with the fact they had defeated Australia so convincingly. He said he hoped the fans back home were enjoying the  victory as much as they were: “We play for our country,” he said. “And we love to make them happy and proud.”

Cricket is now actively encouraged in schools across Afghanistan, and more and more girls are being allowed to play, too.  Now most provinces support their own teams and the International Cricket Council  provides resources. Nurturing of  young talent is a key part of the strategy to promote love of the sport. Children take matters into their own hands and turn any patch of spare land into a pitch. 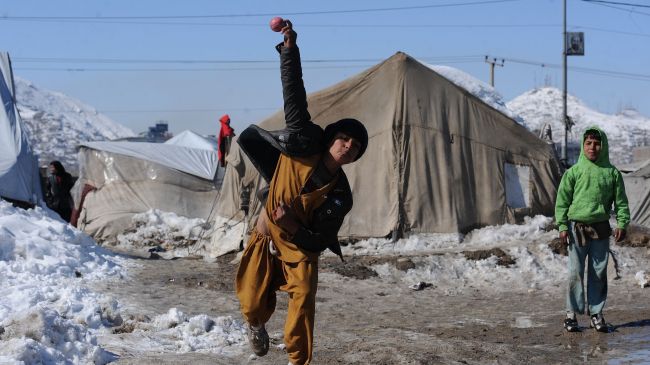 The win by the Under-19s today is yet another step forward in the country’s rapid progress and prowess at cricket.For Afghanistan to beat cricket-mad Australia, of all countries, is just the cherry on top of the cake.

Out of the Ashes, the 2010 documentary  about the rise of the cricket game, subtitled “From Refugees to World Stage,” was a big hit when it screened at the Edinburgh Film Festival, and garnered glowing reviews and awards.  The feature-length film depicted just how big a struggle it was for Afghanistan to surmount the many obstacles in the way of getting anywhere near the top. It was produced by Sam Mendes, and shed a positive light on a country more often seen as a devastated war zone.

Many of the cricketers learned to play in the rubble of the refugee camps of Pakistan, having fled their own country.  Taj Malik, the brother of  Karim, says in the film that there is fighting and injustice everywhere in the world, but the solution to it all is cricket.  The inspirational story now has a subsequent chapter, as the Under-19s prove that cricket continues to thrive in Afghanistan against impossible odds. Afghanistan winning a stunning victory over Australia is not a headline you see every day, especially when it comes to the game of cricket.