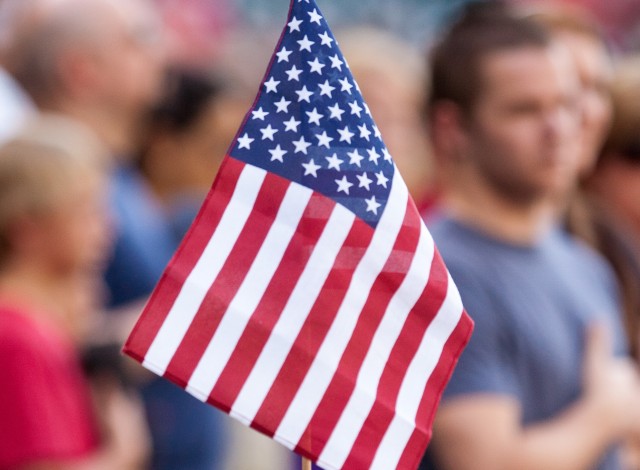 According to videos taken around the country, many citizens of the Great U.S.A. love to show off their patriotism by way of displaying their national flag. From their porch awnings to the car antenna, American flags ripple in the name of freedom, but could it be that some of these beautiful displays of liberty, are not really American? Some people feel that if an American flag is actually made somewhere else like China, or even made with foreign ink and materials it somehow does not hold the same value as the ones made in the U.S., especially when it comes to the Flags flown on military bases and government buildings such as The Pentagon.

In a new rule made Friday, the Government is not allowing the Department of Defense to further purchase any more of its annual 1200 or so flags it uses for court houses and other government buildings around the nation including the Whitehouse, from companies who either have the flags made outside of the U.S., or use non-American made materials in their production.

The U.S. has already had in place since 1941 something called the Berry Amendment that does not allow the Department of Defense to purchase clothing, food, fabric, tools and others materials from foreign sources.  American flags have recently been added to that list. Congressman Mike Thompson (CA) wrote the provision, and has stated that he does not believe U.S. soldiers here, nor abroad should have to serve under a foreign made flag.

Some folks are now questioning their hats, shirts and coffee mugs, wondering if they too should be made in the U.S., since American flags made in China are not considered to be truly American. Others say “good luck,” being that China is full of luck, along with a very large amount of soon to be American house hold products.

Some Americans seem to think much of their money is going to China or Chinese companies due to the amount of “made in china” stickers that are seen. One man told reporters “nearly everything in this country used to be made in the U.S.”  He continued saying that in “these days it is a rarity.” However according to researchers between 80 to 90 percent of consumer purchases made in the United States are on products made in America. In 2010 imports from China only added up to roughly 2.5 percent of the U.S. GDP. China is actually becoming one of the fastest growing markets for American exports which increased over 540 percent in the first 11 years of the new millennium. In other words, there may be an increase of “made in the USA” stickers on products in Chinese households in the years to come.

Now the nation will be entering a new world of sorts, where American flags are not Chinese, but made by American Hands right here in the home land. However as of now there are no reports of Chinese flags being made by Americans. Apparently they may share the same personal feelings of pride in their own country’s national flag.