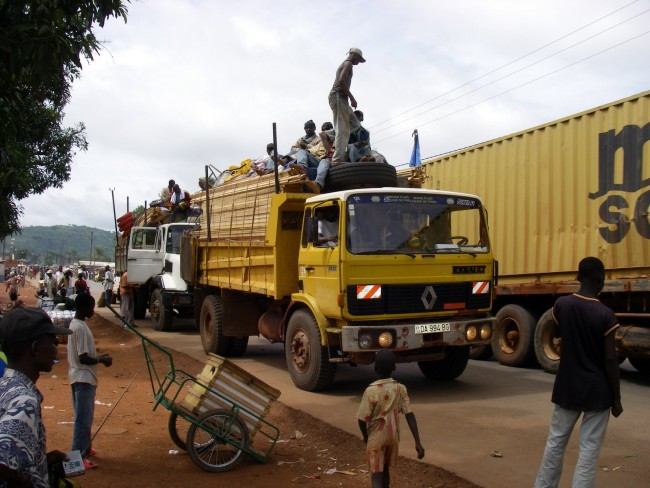 Amnesty International reports that Christian militia attacks in Bangui, Central African Republic has led to a Muslim exodus.  Thousands of traders are escaping the attacks, which has worsened the nation’s humanitarian crisis.  The communal violence has already devastated the country, and more than a million people are suffering from hunger and need food.  With the current scenario of militia attacks and ethnic cleansing in the Central African Republic, the nation is headed towards worse turmoil and a food emergency.  The report of Amnesty International calls the Muslim exodus from C.A.R. a historic ethnic cleansing.

The peacemakers and the French have failed to control the violence, and now the attacks are hampering the relief effort.  According to Amnesty International, the ethnic cleansing of Muslims from C.A.R. has been historic and diplomats have failed to prevent it from happening.  The current president, Catherine Samba-Panza,  has announced war against the militia, who are killing Muslim shoppers.  The anti-balaka, (the militia) have deviated from their mission and are slaughtering the Muslim traders in the Central African Republic, according to Samba-Panza.  She said the exodus and violence is a “security problem.”  However, the Christian militia declared that they are taking revenge against the ethnic group.

Muslims are taking refuge in camps in C.A.R.  Thousands of Muslims are escaping to the neighboring countries of Cameroon and Chad.  Amnesty International reports that the fleeing Muslims ran food markets and were traders in C.A.R.  Therefore, the food markets collapsed, leading to the food crisis.  The United Nations World Food Program (WFP) is providing relief through airlifting food into the country.  The WFP’s spokesman, Alexis Masciarelli, explained that it is too dangerous to carry food relief by road, so a military escort is required.  Thus, the WFP is airlifting the food from Cameroon into the Central African Republic.  Amnesty International and the U.N. calls the exodus of Muslims from C.A.R. an unprecedented event and tragic historic ethnic cleansing.

The WFP provided their first airlift of tons of rice this Wednesday.  However, the food is not enough as more than 1.25 million are suffering from the food crisis in C.A.R.  In the coming weeks, supplies of cereal and other food will be given to the hungry.  Thousands of Christians and Muslims are estimated to have been slaughtered in the violence that started in December 2013.  Moreover, the food markets in the cities are empty as millions have escaped.

The United Nation High Commissioner for Refugees, Antonio Guterress, commented that the “ethnic-religious cleansing” is partitioning the nation of C.A.R., and it needs international intervention to restore peace.  The UN Secretary General, Ban Ki-Moon, said that an action of intervention is a necessity to stop the atrocities.  He has requested the French government to deploy troops to aid the UN effort.  The anti-Balaka fighters are taking revenge from the Muslim minority for supporting the government of the seleka rebel regime of Muslims.  The regime took power in March 2013 and in January 2014, it collapsed.

Amnesty International and the United Nations calls that the tragic exodus of Muslims from the Central African as historic ethnic cleansing.  It sets the precedent for international communities that are already suffering domestic ethnic turmoil, and such patterns only create extreme damage that no one desires.