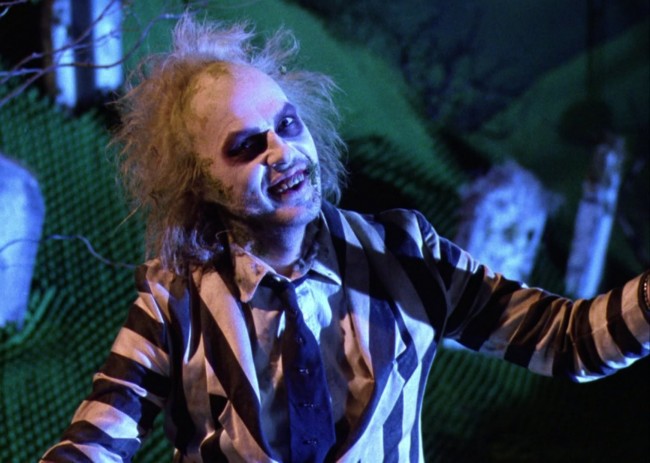 Beetlejuice 2 may be getting closer to happening because of interest in the film that was ignited by Michael Keaton. In the anti-Valentines Day news, Keaton expressed that he is very interested in re-teaming with director, Tim Burton, to make a sequel to Beetlejuice.

Michael Keaton, who is currently promoting his new film, Robocop, expressed his interest for a Beetlejuice sequel in a MTV report. Tim Burton looks to be interested in the sequel, according to Keaton, who would have to be “involved some way or another.” Burton and Keaton have “e-mailed each other,” as they have begun talks about the possible project. Keaton did admit that these are still “preliminary” discussions about the project, but he has already talked to a writer about the possibility of the sequel.

The interest that was ignited by Michael Keaton about a possible Beetlejuice sequel may have something to do with how much he highly regards the first film made back in 1988. Keaton commented on the Beetlejuice rumors as “a funny idea that we’d all get together” in an interview with MTV. He also mentioned that he “loved” the original movie, and said he was “proud” with what the film accomplished. Michael Keaton expressed that his Beetlejuice character was the “one thing that [he would] like to do again, if [he] ever did anything again.” He has also stated that the film was very “unique” and original from an “art perspective.”

The original Beetlejuice was a 1988 comedy directed by Tim Burton that starred Alec Baldwin, Geena Davis, Michael Keaton, and Winona Ryder. The now-classic comedy is about the ghosts of a deceased married couple who reside in their former house, until new residents, the Deetz family, move in only to find that the house is filled with spirits from the afterlife. The film was a commercial success after its release, in which it made around $73 million at the box office, according to IMDB. Beetlejuice has gone on to obtain a strong cult following by its fans since being released.

A second Bettlejuice sequel was actually in the early stages of development in the 1990’s. The sequel would have been titled, Beetlejuice goes Hawaiian, and it would have had the Deetz family move to Hawaii. In their new surroundings, the family would have reportedly dealt with Beetlejuice, undead spirits and paranormal activities. However, this project never got far in production, and the entire film was pulled from development.

In 2012, rumors started flying around about another Beetlejuice sequel that could possibly happen. Writer, Seth Grahame-Smith, had been reportedly working on a script for the sequel since 2012. Grahame-Smith is most noted for his screenplays for Tim Burton’s film, Dark Shadows, and also the film, Abraham Lincoln: Vampire Hunter.

Michael Keaton’s aggressive push to get Beetlejuice 2 made has ignited enough interest in the film for it to begin its preliminary stages. As for Keaton’s public campaigning to get this sequel made, maybe saying “Beetlejuice” three times out loud, like in the movie, will work to get the character back on the big screen.