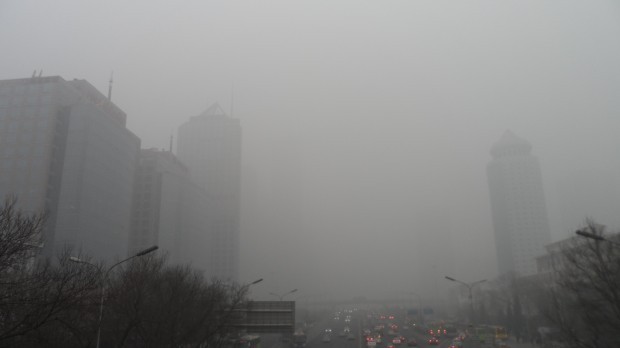 Forecasts predicting that Beijing would be smothered by dense smog over the next three days has forced the Chinese government to issue an “orange” alert for smog in the city. The orange level, the second highest in a four-tiered alert system, is being dubbed “rare,” because even in the case of very severe air pollution, Beijing authorities have shied away from going beyond the mild blue level alert. Beijing’s continuing battle with hazardous levels of smog has further cemented China’s position among the world’s top polluters.

The colors blue, yellow, orange and red are being used by Beijing’s four-level alert system introduced in October 2013. Meant to indicate the level of air pollution, they are based on the Air Quality Index (AQI). A red alert is meant for the most severe air pollution with the AQI being over 300 for three consecutive days. The second level orange alert indicates heavy to serious air pollution levels that range between AQI 200 and 300 alternately for three days in a row. The yellow alert refers to severe pollution that lasts for one day or heavy pollution over three consecutive days.

By Friday afternoon, Beijing was almost engulfed by thick, white smog which forced authorities to step up the alert to orange from the yellow issued on Thursday. The United States embassy in Beijing estimated the concentration of PM2.5 particles, the type of air pollutant that poses greatest threat to human beings, to be 378 micrograms per cubic meter. Anything above 300 has been labelled dangerous by the U.S. Environmental Protection Agency. Particulate Matter (PM) is a combination of extremely minute particles and liquid droplets of pollutants.

The alert comes in the wake of intense public disapproval of the blue alert issued by Beijing authorities last weekend, when the index exceeded a shocking 500 micrograms. Densities as high as 500 are around 20 times higher than what the World Health Organization considers safe: 25 micrograms. The AQI rose as high as 500 that weekend because of the rampant bursting of fireworks to mark the Lantern Festival. The festival signals the end of China’s 15-day lunar new year celebrations. As of Feb. 14, 33 cities in China registered heavily polluted AQI levels. The Xinhua News Agency stated that the Tongzhou district in Beijing reached record high levels of PM2.5 concentration (900 micrograms), despite residents reducing the number of crackers they set off.

Following Friday’s orange alert, authorities have asked people to use only public transport and advised old people and children to remain indoors.Schools, though functioning, have been ordered to cancel all outdoor activities. Orders have been sent out to certain enterprises to reduce production and a ban has been issued on the bursting of fireworks and outdoor barbecues. People have been advised to sprinkle water on their streets and switch off vehicles while stuck in traffic. Should the situation regress to a red alert the Chinese government will have to order half of the capital’s five million cars off its roads according to the rules. It would be implemented based on the last digit on license plates.

Apart from Beijing, other cities in China’s northern province Hebei were also cloaked by dense smog. According to data from the China National Environment Monitoring Center, cities like Xingtai and Shijiazhuang, saw AQIs indicating severe levels of pollution. As of 2 pm, the concentration of PM2.5 recorded by the center showed an alarming  470 micrograms in Xingtai and 410 micrograms in Shijiazhuang. The smog alert in Beijing and its neighboring cities has placed China at the very top of the list of countries most polluted.

Earth Policy Institute published a study in July 2013 where it named China the “most polluting country in the world.” The study, which looked at Carbon Dioxide emissions from the burning of fossil fuels right from 1950 to 2012, found that China topped year 2012 with a mammoth 2,395 million tons, a far cry from the 21 million tons of carbon it emitted in 1950. China accounts for 26.1 percent of global carbon emissions. The United States and India are close behind with 1,403 and 596 million tons of emissions respectively.

The government in China has begun introducing pollution control measures like its adoption of European Union standards for vehicular emissions and the setting up of the four-tiered alert system among others. It has also tightened the noose around industries flouting allowed levels of emissions. Courts have been empowered to dish out stringent punishments for defaulters, which may even be the death penalty in severe cases. However, the implementation of these ambitious regulations has been sketchy so far because many of the rogue industries are also the government’s biggest tax payers. Despite the regulatory measures in place, Beijing is reeling under thick smog, which makes China one of the world’s top polluters and least hospitable countries.