By Alan Milner on February 19, 2014Comments Off on Minimum Wage Increase May Cost Jobs and Reduce Poverty? 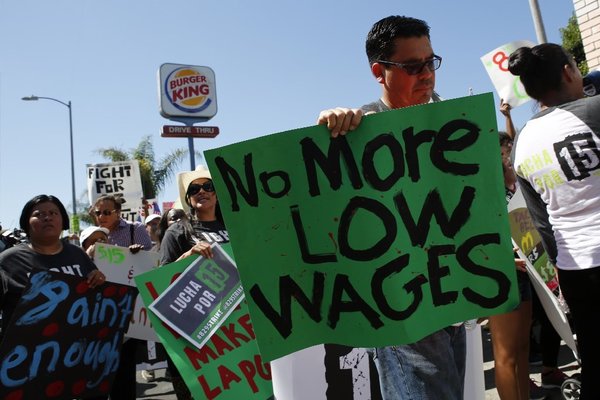 Democratic party proposals for a minimum wage increase to $10.10 could cost 500,000 jobs by the second quarter of 2016, according to a just released report from the nonpartisan Congressional Budget Office.  The same CBO report predicts income increases for 16.5 million low wage workers, and suggests that 900,000 families could be lifted out of poverty by the wage increase, raising questions about how you can raise 900,000 families out of poverty by putting 500,000 workers out of work.

The CBO report, which came on the heels of President Barack Obama’s Feb. 12, 2014 executive order increasing the minimum wage for federal contract employees to the $10.10 level, has fueled increased acrimony between the two major political parties over plans to increase the minimum wage for all workers to the same levels.

Republican leaders like Senate Minority Leader Mitch McConnell, (R- KY), are claiming that the report states wage increase could cost up to one million jobs.  The chairman of the White House’s Council of Economic Advisors, James Furman, has reportedly said that finding no effect on employment levels would be a reasonable estimate, while claiming that the CBO’s estimate of 500,000 jobs lost is too high.

Neither party has contested the principle finding of the CBO report that wage increases for 16.5 million workers would bring 900,000 families out of poverty, but neither side  is conceding that the CBO report actually estimates the job loss could range from “a very slight reduction in employment” to  a reduction of up to 1 million jobs.

While Republican party leaders decry the proposed minimum wage increase because it may cost jobs, they say nothing about the positive economic effects of increasing the buying power of 16.5 million consumers.  In addition, their attempts to stymie Democratic efforts to raise the minimum wage to reduce poverty are out of step with public opinion, according to a July, 2013 poll by Hart Research Associates, which found that 80 percent of the respondents to the poll favored increasing the minimum wage to $10.10.

Despite Republican opposition, some economists actually believe that increasing the minimum wage would encourage more workers to stay put instead of changing jobs to obtain small increases in their hourly wage, which translates into significant savings on employee recruitment and training cost.  In this way, it is thought than an increase in the minimum wage could actually benefit companies whose lower wages have resulted in higher employee turnover rates.

Fourteen states have decided to go it alone, enacting minimum wage increases that went into effect on January 1.  None of the state increases exceed the proposed federal wage increase, but the fact that conservative states such as Colorado,  Arizona,  Montana,  Missouri,  Ohio and Florida are bumping their minimum wages closer to the federal benchmark indicates widespread popular support for the wage increases across party lines.    The hodge-podge of state minimum wage laws creates more problems than it solves, since states with lower minimum wages use that wedge to attract business away from states with higher minimum wages, creating more job instability.

Lost in the fine print was a second proposal studied by the CBO that called for increasing the minimum wage to $9.00 without indexing the rate against future inflation, a measure that would cost up to  100,000 jobs, but would only push 300,000 families above the poverty line.

A minimum wage increase is a virtual certainty during this legislative session, at least in part because neither party wants to go to the polls having failed to enact a measure supported by 80 percent of the potential voters in the next election cycle. The minimum wage increase is the epitome of pocketbook issues, and people tend to vote their wallets when times are tough.  Regardless of which Congressional Budget Office scenario finally become enacted,  a wage increase that costs somewhere between 500,000 and 1 million jobs may cost the Democrats as many votes at the polls, unless they have a plan for helping those displaced workers.    Right now, the Democrats do not have such a plan, bringing an old philosophical question to mind:  how do you decide who gets a seat in the lifeboat and who gets thrown over the side?