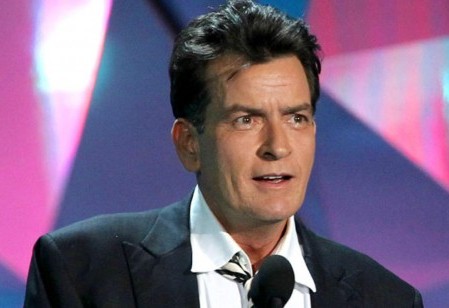 It looks like Charlie Sheen has changed his mind about setting up financial restraints before marrying his fiancee, the Anger Management star says no prenup is needed because basically their s**t will stay separate. The 48 year-old actor told his 24 year-old bride to be, that she could keep her “s**t” and he would keep his.

According to several different websites Sheen has been getting prenup documents to keep from being taken to the cleaners if this romance goes the way of his prior relationships. Sheen, however, told TMZ that there was no plan in place for a prenuptial agreement even though his assets are said to be around $125 million.

Charlie said that prenuptials “poison marriages” and Sheen is not taking any chances in his latest relationship. He is even going so far as thinking of having children with Brett Rossi. The Machete Kills actor may already be paying $100,000 per month towards child support for his four children but he says he game for more; kids that is.

Apparently Brett is keen to start a family with her fella although Sheen says that he not ready to start just yet. Charlie claims that he is having so much fun with Ms Rossi that it should be “illegal.” The star also revealed that his fiancee has be spending time with his twins and that she loves them and the feeling is reciprocated by Max and Bob.

Oddly enough, if Sheen had taken his lawyer’s advice during legal issues with Brooke Mueller he would not be in any position to have more kids. According to celeb website TMZ, when Charlie was at the height of his custody battle with Mueller, his lawyer suggested that “Tiger Blood” Sheen should have the snip aka vasectomy. It seems that the total amount of child support put the wind up Charlie’s legal eagle and the law dog advised having the op. Charlie, rather unsurprisingly, said no to that little game plan.

As Sheen intimated in an interview with TMZ, he is having a lot of fun, so much so that he has invited Robert De Niro over to get involved. It seems that Brett is just crazy about De Niro and Charlie fell in love with Bobby’s most recent film Last Vegas. Sheen Twitter “gushed” about the film and tweeted that he bought a prop from the movie. A photobooth.

De Niro has been asked to stop by Casa Sheen and make use of the movie prop booth which takes snaps, four poses yet. It seems that both Charlie and Brett want to have a few snaps taken with the Hollywood legend.

So, the bottom line seems to be that Charlie Sheen is saying no to the prenup idea, or as he has put it, she’ll keep her s**t and he’ll keep his. Although there is no written prenuptial, Sheen also said that the two will just keep their s**t separate unlike the usual marriage arrangement what belongs to her is hers and what belongs to Charlie is also hers. Since Sheen has taken the pre-emptive move to keep things separate, it will be interesting to see how it holds up in a court of law. Just in case Sheen’s newest marriage goes the way of his prior relationships.