Elephants Are Attacking and Comforting 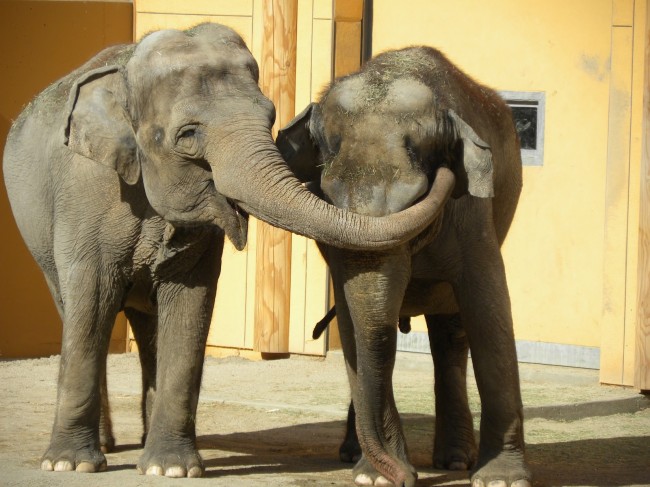 In light of numerous reports of vicious elephant attacks in Asia, a new study suggests that elephants, historically social animals, comfort each other. Conservation efforts in Asia have rose dramatically in the last five years, causing both distress and friendship.

Published in an academic journal, PeerJ, on Tuesday, the study was conducted by examining the behaviors of 26 elephants in a Northern Thailand sanctuary. Though the evidence is based solely on anecdotes, researchers discovered the animals perform many different behaviors for the sole purpose of consoling another elephant.

The elephants under observation performed a variety of comforting behaviors such as putting trunks inside others’ mouths, touching genitals and responding when a friend let out a fear signalling noise.

Elephants reach out to others with their trunks in order to calm each other. Francis De Waal, the study’s co-author says elephants “hug” in the same way humans and some species of monkeys do.  Further studies may need to be performed to support this hypothesis, as the subjects of this instance were exclusively female, adult elephants.

Many smile at the thought of elephants being social and comforting each other; however, this is not the only behavior elephants participate in.

“In Asia, there are serious problems with humans and [elephants],” said Joshua Plotnik chief executive of the nonprofit, Think Elephants International. This study, and follow up research hope to uncover the motive behind these social elephant’s comrade comfort, as well as their attacks on humans.

Last June, near The Wild Elephant Valley nature reserve, local residents caught media attention voicing complaints about elephant attacks. The reserve has been pushing efforts to release the animals in the wild, causing fear for those near by.

Resident Chen told BBC his mother died after being attacked by wild elephants while picking peanuts near his house, which was a neighbor of the reserve in the Yunnan Province of China. “My mother would still be alive today, if she hadn’t been trampled by wild animals,” said Chen.

A month earlier, in a different part of China, a woman was killed by 14 elephants. Initial reports found the woman had been run over by the animals.

Yunnan Wang, a local, government-owned, news website said the trouble did not end there. Upon investigation, the police were allegedly chased out by a second attack of elephants.

The scientific community is confused by these attacks: If elephants are social enough to comfort each other, why are they attacking people? Plotnik and his team hope to answer this question, while simultaneously helping humans to understand the animals.

Though many in Asia are furious and exhausted by elephant attacks, scientists are urging people to give the animals a chance. Elephants have been shown to be generally docile, only attacking when they feel threatened.

Plotnik’s non-profit company, Think Elephants International works directly with Thailand’s young adults, teaching them about elephant behavior and conservation efforts. The goal of scientists like Plotnik, is to create an environment where humans and elephants can coexist.

“[A] better understanding of elephant behavior,” said Plotnik “could really help in developing comprehensive conservation management.” These social elephants attack humans and comfort each other, but only by way of nature.