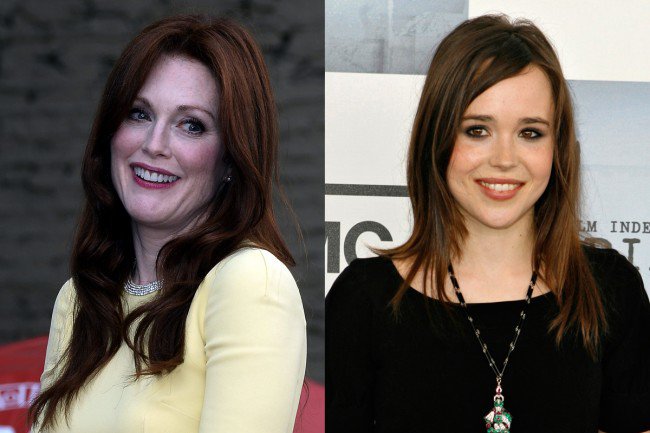 Actor Ellen Page has been prominent in the media since late last week when she announced at the “Time to THRIVE” LGBTQ conference for teenagers that she is gay and tired of covering it up. Her graceful and heartfelt coming out as a lesbian was considered not only a personal victory for Page, but also a victory for the equality movement. Now Page has something else to celebrate. Respected four-time Oscar nominee and gay rights activist Julianne Moore and funny man Zach Galifianakis of The Hangover fame have signed on to star with Page in the gay rights drama, Freeheld.

Page is perhaps best known for her role in the 2007 movie Juno in which played a quirky teenager faced with an unplanned pregnancy and some difficult decisions. She has long been associated with the Freeheld project, which is based on Cynthia Wade’s Oscar winning, true-life 2007 documentary with the same title.

In Freeheld, which will begin shooting this summer, 53-year-old Moore will play the role of the late Laurel Hester, a New Jersey Police Detective who is the lesbian lover of 26-year-old Page’s Stacie Andree. Moore has previous experience playing the role of a lesbian as she did in the 2010 movie, The Kids Are All Right. In that role, she acted as the lover of four-time Oscar nominated Annette Bening in a plot involving artificial insemination and the ensuing complications of the donor father becoming involved with the family.

Galifianakis, who was recently involved in the 2014 “A Night of a Thousand Vaginas” fundraiser to help women get abortions in Texas, will have a supporting role in Freeheld as prominent New Jersey gay rights activist Steven Goldstein. Further, the script for Freeheld is written by Ron Nyswaner, whose 1993 movie Philadelphia dealt with the issue of AIDS and discrimination against gays. That movie garnered Tom Hanks an Oscar for best actor and received an Oscar for Best Music, Original Song for the “Streets of Philadelphia” by Bruce Springsteen. Directed by Peter Sollett and with an abundance of talent on board and the social message of equality, the movie is likely to be well received by the media as well as many moviegoers.

Freeheld tells the story of two lesbian lovers who face hardship, discrimination and a “battle for justice” and equality. Detective Hester who has “spent 25 years investigating tough cases … protecting the rights of victims and putting her life on the line” becomes terminally ill. She has less than six months to live and her request to assign her pension payouts to her domestic partner Andree is denied.

According to the original documentary, Hester is on record as saying, “Twenty-four years is a long time in the closet.” She was not looking to put her sexuality to the forefront but was simply seeking to apply the same rules to her pension as those applied to heterosexual couples. Hester made this clear saying, “…were it not for this set of particular circumstances, I would not have to be here to announce my sexuality” which she felt strongly was “nobody’s business.”

In the documentary Freeheld, Hester’s battle to have her pension assigned to her partner Andree as well as her battle to beat brain cancer has been described as a “tension-filled political drama with personal detail, creating a nuanced study of a grassroots fight for justice.” It remains to be seen if Ellen Page and Julianne Moore will have the chemistry to recreate the story with the same intensity.