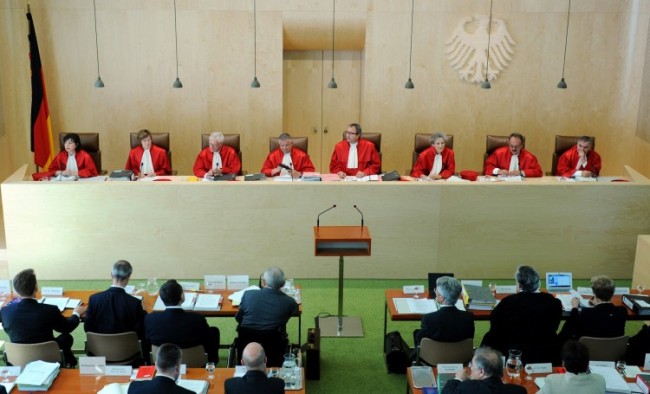 European Central Bank (ECB) is able to maintain its bond purchasing policy for now after it received welcoming respite from the highest German court. The Federal Constitutional Court of Germany based in Karlsruhe ruled that the legality of the Outright Monetary Transaction (OMT) program should be heard in the European Court of Justice (ECJ). Although the Federal Court believes that the OMT program may be illegal, violating the European treaty, it determined that the issue could be better decided in the hands of European Court of Justice with more restricted interpretation on the OMT program.

The OMT program is a monetary policy that the ECB will purchase the bonds of a country or sovereign debts without limit. The reasoning behind the OMT program is that the ECB can alleviate the members of the Eurozone under severe financial constraint. It was born after series of financial fiascoes unraveling in its member countries: Greece, Portugal, Cyprus, Spain, and Ireland.

The common feature of financial problems by these countries is the extremely high debt-to-GDP ratio; they borrowed too much against the value of their nations. Ireland did not have a high debt-to-GDP ratio before 2008 but guaranteed the debts by its banks. So when the financial crisis hit Ireland in 2008, the private debts suddenly became those of Ireland.

At the peak of multiple crises in the Eurozone, Mario Draghi, the President of the ECB, announced in September 2012, that the ECB would purchase the unlimited amount of debts of countries in trouble if necessary through the OMT program. Even though the program has not been used even until now, it provided a real power to the ECB’s drive to save the Eurozone. All central banks of the Eurozone nations accepted the policy, except Germany. The head of the Bundesbank, the Germany’s central bank, opposed the policy, challenging its legality at the German court. Without the backing of Germany, the healthiest country in the Eurozone, the OMT program would practically be useless. When the German Federal Court decided to punt the issue to the European Court of Justice, handing the Bundesbank defeat, the European Central Bank received a room to provide much need financial respite to its member countries under siege.

Experts generally agree that the European Central Bank has a better chance with the European Court of Justice. Gunnar Beck, a legal theorist at the University of London, told to The New York Times that that the ECJ would more likely rule for the ECB than the German court. He stated that the ECJ is more inclined to look at the legality of the ECB’s policy in favor of the European Union. He added that the German court’s decision to refer the question to the ECJ sealed the deal for the ECB. The Economist comments that it is very unlikely that the ECJ labelled as “notoriously integrationist” would accept the entirety of the compromises on the OMT program suggested by the German Federal Court.

Experts, however, also caution that there is still a risk. Even if the ECJ eventually determines the OMT program is legal, the German Court can later rule the OMT program as “ultra vires” or beyond power and prevent the German Bundesbank from participating in the OMT program. Franz Mayer, professor of public and European law at Bielefeld University, stated in his interview with Reuters that the series of compromises leading from the Maastricht Treaty, which created the EU, to the Lisbon Treaty in 2009, developed a situation where the European Parliament cannot have more legislative authority than those of member nations. Through the 2010 Honeywell case, the German court set the procedure that leaves itself a room to determine the legality of a contested European policy and measure even after it refers to the ECJ, Reuters reports.

The Federal Court is not out of picture yet. The German Court, after giving temporary respite to the Eurozone, stated that on March 18, it would determine the legality of another bailout measure called the European Stability Mechanism from European Central Bank.