Flood Crisis in UK Gets Worse 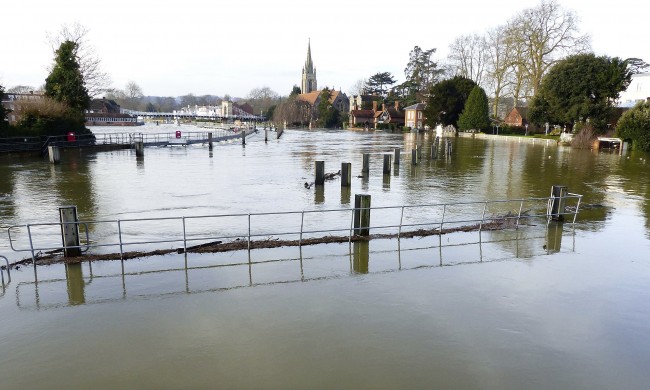 The UK flood crisis is getting worse, with the severe warnings reaching 16 across the south of the country. All – apart from two – of those warnings are for stretches along the River Thames, while the other two are in Somerset.

The UK government continues to debate over how to handle the flooding. UKIP leader Nigel Farage suggested that money should be diverted towards helping people in these troubled areas from the budget for overseas aid. He also told government that it is failing to listen to the local politicians.

Flooding may have been avoided had the local rivers been dredged, as the local politicians suggested. Local people asked for the dredging six months ago, in preparation for the bad weather. The government refused to allow it due to a lack of funds. Farage told government that it has to “start re-thinking the management of the Levels” to avoid the problem getting worse, or it happening again in the future.

He has also criticized the government for not giving the people affected any money. There are calls for the people in charge to put the nation first, before overseas countries, just this once.

People along the River Thames have been warned to prepare for their houses to be flooded. According to MeteoGroup weather forecasters, the next storm will hit tonight, with up to 20mm (0.78 inches) of rain expected. The Royal Marines are out laying more sandbags down, around affected areas, in an attempt to lessen the damage.

The flood crisis in the UK continues to get worse with many people now losing their homes. One man, Sam Notaro, did attempt to put in defenses against the possibility of the water levels rising. His home was built as high as his planning permission allowed, knowing that it was in an area of likely flooding. He also added moats around the area and dredged as much as possible. While it had helped in the beginning, it seems he is losing the battle as the water seeps into his property.

Along with the 16 severe flood warnings, there are 76 less severe warnings and 213 alerts spreading across parts of England and Wales. Train lines have been closed due to debris and companies are advising passengers not to travel, if they can avoid it. However, National Rail is trying to go on, as if there are no issues. No speed restrictions have been put in place yet, but it is worth checking online for any changes to journeys.

As well as the sandbags, local officials are trying to handle the flood crisis. Various areas have pumps installed to get the water away from the lands and homes. Moorland and Fordgate have just received three new pumps, since they are among the worst affected areas. The pumps are responsible for 1.5 million tonnes of water being drained every day.

However, none of this is enough and the government needs to do something to help the people of England and Wales. The flood crisis is getting worse, and the weather shows no sign of stopping any time soon.

Mirror
The Guardian
The Telegraph