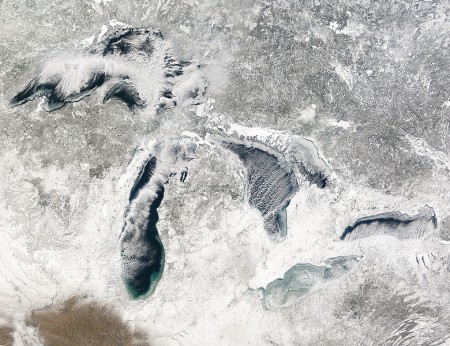 The Great Lakes are possibly covered by a record amount of ice this year after polar vortexes have left the Midwest and Northeast in a state of abysmal cold.

February 19, 1979 was the year of the official record’s highest amount of Great Lakes ice cover at 94.7 percent. The Great Lakes are made of five large lakes that were the result of glaciers that carved out the earth, melted and left some of the largest pools of water on the planet behind. They are Lake Superior (world’s largest freshwater lake), Lake Michigan, Lake Erie, Lake Huron, Lake Ontario and Lake St. Clair. Lake St. Clair, the smallest is nearly covered already.

Temperatures are expected to remain below freezing over the next week. It will warm up a bit, so ice cover may recede a bit. The Christian Science Monitor suggested that this ice cover on the Great Lakes and the cold weather broadly might indicate a period of less snow. So as the Great Lakes become covered with possibly a record amount of ice, record low amounts of snow may occur.

When there is open water in winter, evaporation takes place and that moisture that is picked up turns into snow. With the ice cover, cities and towns along the edges of the Great Lakes and nearby can get relief after being blasted with several inches of the stuff in recent months.

A key city in this indication for weather is Buffalo, New York, which is the United State’s snowiest city. Because of the ice cover on Lake Erie and Lake Ontario, Buffalo has been saved from its usual winter load of the white stuff. Last year, as Christian Science Monitor reported, there was a whopping 43 inches of snow just in the month of January. With the ice cover this year, they only received a mere 13 inches of snow.

Icebreakers are ships that do what their name suggests, and they have been working round the clock because they are charged with the task of clearing a path for needed supply ships that bring goods. Some of these ships come from far away nations like Japa and Norway and end up in places like Duluth, Minnesota where there is a pier on Lake Superior.

These bodies of water are an important part of the world’s ecosystem, in fact. The Great Lakes that are set to be covered by a record amount of ice hold a significant portion of the world’s natural freshwater on Earth’s surface, according to several sources.