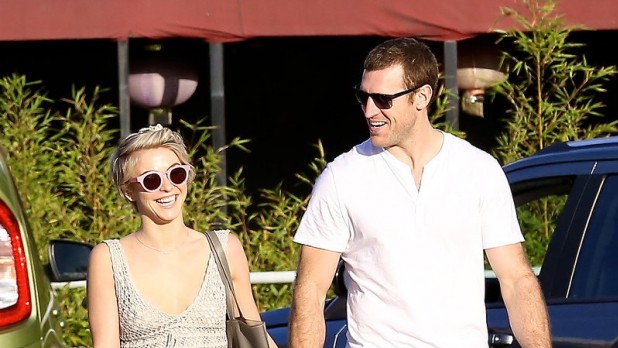 Julianne Hough has let the cat out of the bag, and how! Even as thousands pored over pictures of Hough and Canadian hockey player Brooks Laich, trying to deduce if their handholding meant new love, Hough was spotted once more locking lips with the handsome Laich. Giving him a long hug, Hough confirmed that Laich was her new beau by kissing him goodbye before he boarded a flight.

The former Dancing with the Stars pro set the internet abuzz with rumors of a fresh romance when she was spotted taking a hike with the Washington Capitals player in Los Angeles on Sunday. Wearing gym shorts, a sporty white tank top and sneakers Hough had brought along her dogs, Lexi and Harley, to the hiking trail. Seemingly in a great mood, she walked hand-in-hand with Laich. After their hike, the couple was seen at Bristol Farms, picking up some groceries, before they drove away in Hough’s Mercedes SUV. The budding romance seemed almost confirmed by one of Hollywood’s biggest indicators of a relationship: Laich was seen in the driver’s seat of Hough’s white SUV.

The hiking excursion was not the first time the couple were spotted together. A day before Valentines Day, the couple was seen casually ambling around LA streets. A few days before, they were seen on Twitter tweeting sweet messages of love. The couple were apparently set up by a mutual friend and are totally smitten by each other. Sources close to the Safe Haven star have said that Laich is a nice guy and that Hough seems happier than ever with him. Hough kissing Laich goodbye seems proof enough.

But all has not been rosy and romantic for Hough. The 25-year old professional ballroom dancer broke-up with her longstanding boyfriend, Ryan Searcrest, in March 2013. The couple, who had been together for over two years, separated ways because of their packed schedules. Hough, who had always been open about her love life, has revealed in the March issue of SELF magazine that she had decided to remain single for a year after her break-up with Searcrest.

Ever since she declared her relationship status as single, the dancer-actor, has been busy maintaining her already awesome fitness levels. She says she knows most people don’t go to the gym or train for a marathon because they are out of shape or are worried they won’t finish the marathon. She herself used to hate doing cardio-based workout routines because she was little asthmatic. But following her own advice of keeping at it, Hough says she has now gotten into running and that she thinks running can become therapeutic once you have crossed the mental block.

Speaking about her past relationships, Hough says they helped her grow into the person that she is today and that she is grateful for them. During her almost-year long self-exile from dating, Hough recalls moments of desperation; when she felt it “sucked.” In those moments, she says she thought of what her dad once said about being happy with oneself so that you don’t need another person to fill a void. Though the interview, posted on the magazine’s website, quotes Hough as saying she wanted to concentrate on herself and her soul for the moment, things have clearly taken a turn for the better. Hough’s happy looking kiss with new beau Laich proves that she is after all the “relationship girl” that she thinks she is.

E!
E!
SELF
US Weekly
The Celebrity Cafe.com
Wet Paint