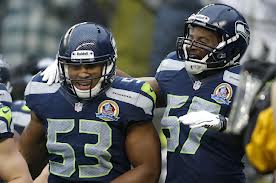 Malcolm Smith of the Seattle Seahawks has been named the Super Bowl XLVIII MVP. The little known Smith led his team to a 43 to 8 victory over the Denver Broncos in New York on Sunday night. Smith had nine tackles and one pass defense in the game. His big play came near the end of the first half when he intercepted Peyton Manning and returned it 69 yards for a touchdown. The play put a stamp on a Seattle victory dominated by great defense. Smith helped the Seahawks to win their first ever NFL Championship and only the second ever championship for the city of Seattle. He is just the third outside linebacker to win the award.

Smith is a three year pro who was drafted in the seventh round by the Seahawks in 2011. He went to college at USC, and was a player under Pete Caroll during his stay there. He played in 47 games during his four-year career with USC, recording 174 tackles, two interceptions, one sack and two touchdowns. He has played in almost every game since becoming a pro, with his stats increasing each year as his play has improved.

Malcolm is the brother of another famous football Smith. Steve Smith, who now plays for the Rams, is Malcolm’s older brother. Smith is best known for his catch against the New England Patriots in Super Bowl XLII that helped set up the game winning score for the New York Giants. The Giants went on to win the Super Bowl 17 to 14.

Like his older brother, Malcolm Smith’s Super Bowl moment was a key to his team’s victory. Smith won the Super Bowl MVP late in the second quarter. The Broncos were driving deep into Seahawks territory. The lead for Seattle at the time was only fifteen to nothing, and a touchdown by Denver would have brought them right back into the game. Peyton Manning took the snap and stepped back into the pocket. As he released, the rush reached him, causing his arm to jostle and the ball to come out wobbly and off target. The ever vigilant Smith saw the ball in the air and made a break for it. He caught it cleanly and scampered 69 yards for a touchdown. The Broncos never really recovered from the blow.

Several other Seahawks also had MVP type performances. Russell Wilson completed 18 of 24 passes for 206 yards and two touchdowns. He added three rushes for 26 yards. Wilson came up big several times during the game. He was his best on third down where they converted seven out of eleven tries. Percy Harvin lived up to his big play name as well. On the opening kickoff of the third quarter, Harvin took a short line drive kick and returned it 87 yards to the house, putting the Seahawks up 29 to nothing. Marshawn Lynch had a quiet day on the ground but did punch the ball into the endzone in the second quarter.

No one would have predicted Malcolm Smith would win the Super Bowl MVP. Given the Seahawks strength on defense, it isn’t surprising the award went to that side of the ball.  With all the big names on the defense for Seattle, it is nice to see an everyday blue color football player take home the hardware. Score one for the little guy.