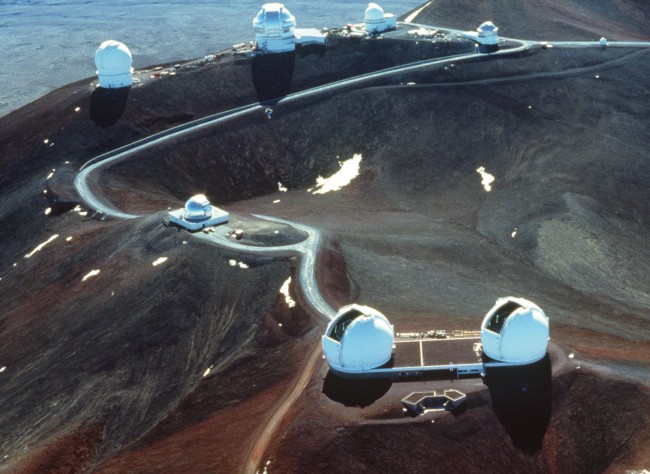 Plans for the construction of the largest telescope in the world moved ahead this week as the University of Hawaii’s Board of Regents approved the lease of school land atop the dormant Mauna Kea volcano on Hawaii, the largest of the eight Hawaiian Islands.  The board’s vote was a near-unanimous 15-1.

The project, known as TMT or Thirty Mile Telescope, began as a joint effort by the California Institute of Technology, the University of California and the Association of Canadian Universities for Research in Astronomy.  They have since received support from institutions and observatories in China, India and Japan.

The segmented primary mirror of the telescope will be 30 meters in diameter, tripling the size of the current largest optical telescope, the Gran Telescopio on Spain’s Canary Islands.  It will allow observers to view planets orbiting stars beyond our own galaxy and would open new windows for the study of the formation of new planets and stars as far as 13 billion light years from earth.
Dynamic Structures, Ltd., a Canadian company based in Port Coquitlam, British Columbia designed the TMT, and will also be in charge of construction.  Their plan is to build the device in Canada before shipping it to Mauna Kea when the site is ready.  Work on the project is expected to begin later this year and should be completed in 2021.

Building the world’s largest telescope on Mauna Kea is not without opposition.  The lone dissenting voice from the Board of Regents belonged to student representative Jeffrey Acido while a contingent of University of Hawaii students gathered outside the building with protest signs and banners.

Many of the arguments against the telescope are centered on the protection and conservation of sacred native Hawaiian homeland. Today the summit of Mauna Kea volcano is already home to 13 working telescopes and many are saying “enough is enough.”  Environmentalists are opposing the development too, claiming that the TMT will harm the wekiu bug, a rare insect that can withstand the freezing temperatures at the top of the mountain.

Hawaii, and specifically Mauna Kea, will certainly profit from the lease arrangement.  The price tag for the land use will be over $1 million dollars per year.  80 percent will be distributed to the Office Mauna Kea Management which oversees conservation of the natural, cultural and recreational resources on the mountain.  They also maintain a facility for astronomy, education and research.  The remaining 20 percent will go to the Office of Hawaiian Affairs.  The rent begins at $300,000 and increases as the construction progresses.

Mauna Kea’s and Hawaii’s bragging rights to the world’s biggest telescope may not last long, however.  TMT is expected to take a back seat in the near future to an even bigger telescope being planned by a number of European nations. The scope will boast a lens with a diameter of 42 meters and it has already been dubbed EELT or The European Extremely Large Telescope.