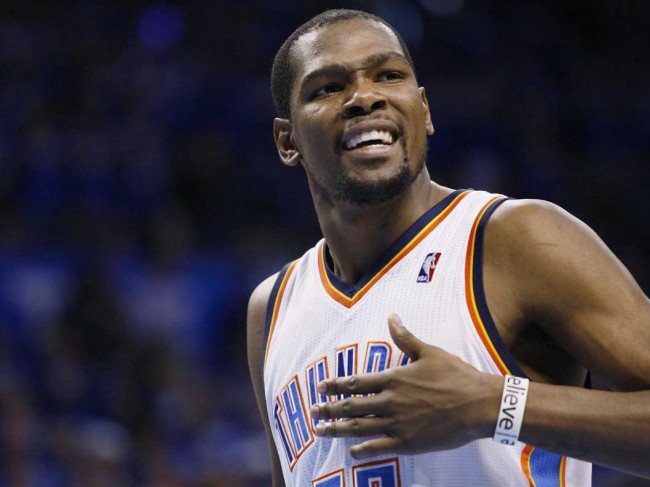 The Oklahoma City Thunder played host to the New York Knicks on Sunday, in a match up that saw the NBA’s two scoring leaders go head to head. The Thunder’s Kevin Durant is currently leading the league in scoring with 31.0 points per game. While the Knick’s Carmelo Anthony is second in the league, averaging 27.4 points per game.

The Thunder came into Sunday’s action as the kings of the Western Conference with a first place record of 40-12, 2.5 games ahead of the second place San Antonio Spurs. The Thunder are one of the few teams to be in the top five in team offense and defense. With Russell Westbrook out of the Thunder line up due to injury, Durant has become the leading for the MVP award this year.

The Knicks came in on the opposite end of the spectrum, with a 20-30 record and 2.5 games out of the final playoff spot in the east. The Knicks have been surrounded by drama for much of this NBA season. Head coach Mike Woodson, is on the hot seat and many expect him to be fired following this year’s all-star break. Meanwhile, Carmelo Anthony has been involved in a swirl of trade rumors and it is unknown where he will playing next season, or even at the end of this season.

While the Thunder hold the better overall record over the Knicks, Anthony holds a head to head record of 11-1 against the current NBA scoring leader. The Thunder got the best of the Knicks in their last meeting on Christmas Day by a score of 123-94; however, Anthony did not play in that game. In the first half it was clear that Durant was looking to improve his record versus Carmelo.

Durant covered Anthony for much of the first half and with defensive support from Serge Ibaka, Anthony was held to just 2 points in the first quarter. Ibaka is second in the league in blocks, averaging 2.5 per game. Durant outshined Carmelo offensively in the first half finishing with 19 points and 4 assists, while Melo had only 7 points at the break.

Despite only seven points by Anthony, the Knicks only trailed by 5, 58-53 at the end of the first half, thanks to strong three-point shooting by Iman Shumpert, and Raymond Felton. However, in the second half the Thunder began to take control of the game.

Jumping to the fourth quarter, where Durant took the game over. Durant scored 11 straight points for the Thunder in the final quarter, while continuing to play solid defense on Anthony. Carmelo finished the game with 15 points on 5 of 19 shooting with 7 rebounds and 5 assists. The Thunder outscored the Knicks in the all four quarters in this one as they held on to win 112-100.

Durant finished the game with a monster stat line of 41 points on 12 of 22 shooting, and was one assist shy of a triple double, with 10 rebounds and 9 assists. The Thunder came out with the victory against the Knicks in this head to head meeting between the NBA’s two scoring leaders and will be looking to carry their terrific regular season into the playoffs.