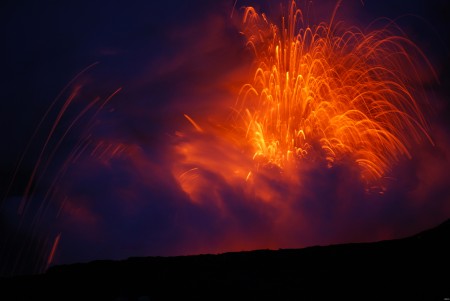 A group of researchers have been examining volcanic eruptions and have decided that scientific studies show that the volcanic outbursts along with heat storage under the sea are the causes of the unpredictable pause of global warming. It had caused nearly twenty years of rapid escalation in the surface temperatures of the Earth. The break in the temperature has happened even though there has been a rise in atmospheric conditions where there are numerous areas of heat catching carbon dioxide.

The climate researchers are now stating that increasing CO2 levels are unable to easily change the Earth’s climate. But with the 2000’s ending as the warmest years on record when compared to the average temperatures that occurred from the early 1900’s to the year 2000. Scientists explained that the cooling of one or two decades of surface temperatures does not signify any long time period tendencies. They took note of a minor cooling that had also happened between the 1940’s and 1970’s, but that ended up just seeming to renew the warming when it began again.

A new research study has shown that global warming might have slowed down as of late because of small volcanic eruptions which ended up dimming the sunlight and counterbalanced the rise in productions of gases which trapped heat in the atmosphere.

Since the late 1990’s, the rate of increasing temperature has slowed, thus encouraging those who have doubted the insistence of trying to fight global warming by changing from fossil fuels to energies that are considered renewable. Climate scientists have basically ignored the effects of sulphur blocking the sun which had been spewed out from nearly 20 volcanoes since 2000. These happened to include Merapi in Indonesia and also Kasatochi in Alaska.

Benjamin Santer, who works for the Lawrence Livermore National Laboratory in California, explained that even though volcanoes are definitely part of the reason for the pause but there is not one sole factor that is responsible for the break. A more in-depth explanation for the hiatus might the United Nations grab a climate deal. There is to be a global warming summit in the latter part of 2015 in Paris, France.

Santer exclaimed that there were many other factors that could have come into play as well, such as the waning in the sun’s output, which is linked with a natural rotation of sunspots, or the increase of pollution that could be blocking the sun that is coming from China.

Volcanoes are behind about 15 percent of the difference between the anticipated and detected climate pause, explained the research report. However, temperatures should continue to increase due to unceasing rising of greenhouse emissions.

The United Nations steered a survey in 2013 which proposed that possible extra absorption of heat by oceans and other natural climate variants might also help explain the slowing of global warming. They found that sulfuric acid drops along with sulfate particles which erupted from the volcano out into the stratosphere stay above the troposphere. This could cause warming of the stratosphere and in turn cool down the troposphere for around two years or so.

With the ocean, in the past for over two decades, the western trade winds have been discovered to have strengthened to unparalleled amounts and it has carried warm surface waters to the west. These have then been replaced by cold water in the eastern Pacific which has come from the deep ocean.

A group of scientists have been doing research into volcanic eruptions and have decided upon the theory that volcanic outbursts along with heat storage under the sea are the causes of the unpredictable global warming pause.