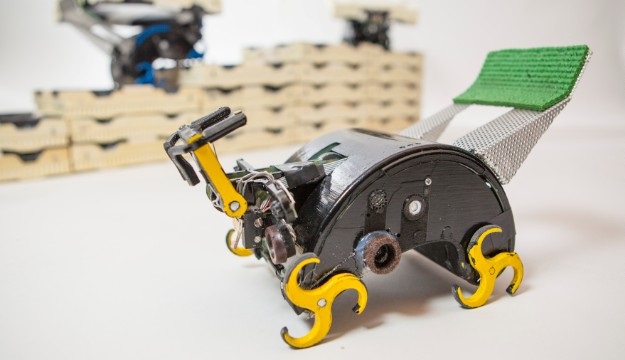 A team of computer scientists have recently developed termite-inspired robots, capable of autonomous construction. Engineers and researchers working at the Harvard School of Engineering and Applied Sciences (SEAS) and the Wyss Institute for Biologically Inspired Engineering have developed a cluster of robust robots that are able to manipulate their environment, without supervision or any form of outside communication. The study was published in the Feb. 14 issue of the journal Science, and the findings were presented at the American Association for the Advancement of Science (AAAS).

The termite robots, as part of Harvard’s TERMES project, demonstrate that robots can collectively assemble intricate 3-dimensional structures, including small towers, castles and pyramids. The buildings were made using a series of foam bricks that were transported from one region to another, and manipulated into the correct position. If the robots encountered a situation where they needed to access a difficult to reach region, they could employ foam blocks to create makeshift ramps and staircases. The units – standing no taller than 4.7 inches high – were also aware of the positioning of other robots in the near vicinity, as they circled the growing structure.

Professor Radhika Nagpal, who is involved in computer science at Harvard SEAS, recently explained what it was about termite behavior that inspired the research team to model their robotic creations from the eusocial insects. Nagpal indicated that termites can achieve incredibly complicated feats, through cooperating as a team, without ever needing an individual to oversee the work. She also point out that termites do not need to convene and discuss their intentions, or plan their next steps. Meanwhile, human construction projects require meticulous planning and the inclusion of highly skilled laborers that, typically, function as part of a hierarchy.

Termites rely upon the self-organizational principles of stigmergy – a form of indirect coordination between individual units of a colony. Essentially, a change in the environment, resulting from a previous action, provides clues as to what actions another, independent agent should perform; these continued changes to the environment are constantly observed, prompting the next step in the build. Justin Werfel, a researcher in bioinspired robotics at Wyss Institute indicates that, in building a mound, none of the termites know what the others are doing, or the overall state of the mound; it is this autonomy that the research team aimed to replicate with their novel array of robots.

Nagpal’s research team are experts in distributed algorithms, capable of enabling the interplay between large numbers of robots. The individual robots start the construction process, in tandem with one another, from a single “seed” brick that is already in position. If a single robot malfunctions, the other robots can continue unimpeded. This system also ensures that the build process can be carried out by a few individual robotic units, all the way up to a few hundred.

One of the study’s coauthors, Kirstin Petersen, was involved in designing and manufacturing the TERMES robots, as well as the foam building blocks. According to Petersen, the robots are fitted with just four sensors and three actuators to achieve their objectives, and move using wheel-legs (a.k.a. whegs). She also explains the reasoning behind co-designing both the robots and foam bricks to develop a minimalist and reliable system:

“Not only does this help to make the system more robust; it also greatly simplifies the amount of computing required of the onboard processor. The idea is not just to reduce the number of small-scale errors, but more so to detect and correct them before they propagate into errors that can be fatal to the entire system.”

Unlike the newly developed TERMES system, most robotic systems use a central controller to ensure the actions of each individual robot is successfully coordinated. Although this “eye in the sky” approach is able to improve the efficiency of the system, and help correct any encountered errors, such a configuration becomes increasingly difficult to operate when using larger numbers of robots. In addition, if the central controller becomes compromised, the entire system is likely to fail.

In terms of their future application, the researchers believe enhanced versions of the robots could be deployed for construction in regions that are too dangerous for humans to work, such as in outer space or in underwater research stations.