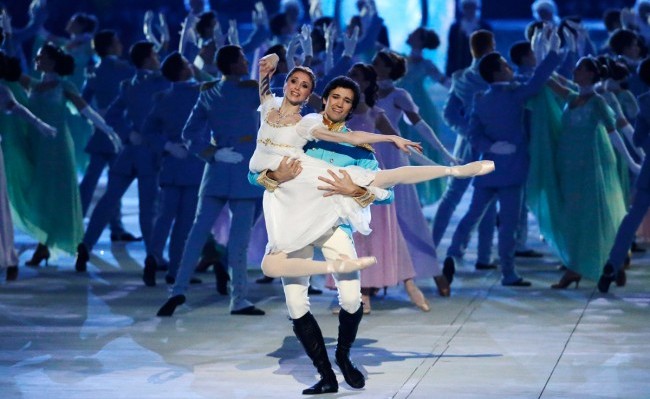 The opening of the 2014 Winter Olympics in Sochi paid tribute to Russia’s contribution to literature and the performing arts. The poets, authors, composers, choreographers and artists highlighted throughout the program were not only influential in Russia but also throughout the world.

Imperial Russia’s artistic “Golden Age” came about because of Catherine the Great. During her reign, from 1762-1796, she expanded the Russian empire, opened museums and theaters, and expected the nobility to speak French. This practice continued after her death. Children growing up in households of the aristocracy often did not speak Russian fluently as it was the language of the common people — the peasants and servants.

As a member of the nobility, poet and author Alexander Pushkin (1799-1837) was educated in French. He is credited as both the founder of modern Russian literature and with developing the Russian language. His works range from fairy tales, such as The Tale of Tsar Saltan, to dramatic works that were used as the stories for full-length operas, such as Eugene Onegin and Boris Godunov. Pushkin wrote in the vernacular, using his writing as part of his penchant for social reform. Although some of his works were banned at the time, he is honored throughout Russia with museums, monuments and streets named after him.

Leo Tolstoy (1828-1910) was born into a well-known family of the nobility. He was educated by tutors who spoke French and German. Despite his wealth, his novels portrayed the realism of the times. The separation between the aristocracy and peasants was highlighted in such works as The Cossacks and Anna Karenina. In his most famous work, War and Peace, the scenes between members of the nobility are written in French and the rest of the work is in Russian.

Not all authors in 19th-century Russia were surrounded by wealth. Fyodor Dostoyevsky (1821-1881) grew up in a home on the grounds of the Mariinsky Hospital for the Poor where his father served as a surgeon. The hospital was on the outskirts of Moscow in a lower class district. The family was not originally part of the nobility but was elevated to that status after his father was promoted. Dostoyevsky was exposed to literary classics at an early age by his nanny and parents who were avid readers.

In addition to the influence of authors like Pushkin and Cervantes, Dostoyevsky’s imagination was fueled by the events going on around him. While he played on the grounds of the hospital, he heard about the struggles, injustices and cycle of poverty among the lower classes. This became part of his writing. He is best known worldwide for his novels, Crime and Punishment and The Brothers Karamazov.

Anton Chekhov (1860-1904) was also not part of the aristocracy. His abusive father ran a grocery store and his grandfather had been a former serf. Chekhov’s imagination was fueled by his mother’s ability to tell stories. His father eventually declared bankruptcy and the family had to sell their possessions. Chekhov took odd jobs to pay for his education. He was accepted to medical school and wrote daily short stories about Russian life to pay tuition and support the family.

Chekhov continued to write after he received his medical degree, producing hundreds of short stories during his lifetime. His plays, such as The Three Sisters, continue to be performed today. The last play he wrote before his death, The Cheery Orchard, was praised by George Bernard Shaw and quickly received international acclaim. It depicts an aristocratic family who has to sell their property, the rise of the middle class and the ending of serfdom.

Sochi continued its tribute to literature and the performing arts by highlighting a few of the many internationally recognized composers from Russia’s Golden Age. Pyotr Ilyich Tchaikovsky (1840-1893) wrote the music for the ballets of The Nutcracker, Swan Lake and The Sleeping Beauty, as well as operas and symphonic works. He studied composition at St. Petersburg Conservatory and taught at the Moscow Conservatory. The Nutcracker is performed every year at Christmas time all over the world. Tchaikovsky was the guest conductor at the 1891 opening concert of Carnegie Hall in New York City.

Alexander Borodin (1833-1887) was a doctor and chemist in addition to being a composer. He wrote symphonic and chamber music but is best known for his opera, Prince Igor. The famous Polovtsian Dances are from that opera and are often performed alone as a concert work. This music was also adapted in the Broadway musical, Kismet. Borodin supported women’s rights and was one of the founders of the St. Petersburg School of Medicine for Women.

Nikolai Rimsky-Korsakov (1844-1908) frequently used fairy tales and folk traditions as the storyline of his operas and symphonic works. An example of his nationalistic musical style is in the Russian Easter Festival Overture, which incorporates Russian Orthodox melodies and church bells. The composer was part of a group known as the “Mighty Five,” Borodin being one of them, who developed a style that combined western European harmonies with Russian folk music. He became a professor of composition and orchestration at the age of 27 for the St. Petersburg Conservatory. One of his best-known works is Scheherazade, based on the story collection of One Thousand and One Nights.

Sergei Prokofiev (1891-1953) began his musical training at an early age by listening to his mother practice piano works by Beethoven and Chopin. He was accepted at the St. Petersburg Conservatory where he studied orchestration with Rimsky-Korsakov. Prokofiev composed a wide variety of music, ranging from piano concertos, symphonies, ballets and operas. Some of his most famous compositions include the ballet Romeo and Juliet, the children’s classic Peter and the Wolf, and the opera War and Peace based on the book by Tolstoy.

Other names from the Sochi opening ceremonies represent the visual arts of painting and choreography. Sergei Diaghilev (1872-1929) was the ballet impresario, patron of the arts and critic who founded the Ballets Russes. He graduated from the St. Petersburg Conservatory, having had Rimsky-Korsakov as his composition professor, but gave up his pursuit of a career in composition. His cousin introduced him to a group of friends who were art lovers and his knowledge of the art quickly surpassed everyone’s in the group.

He organized an art exhibition in 1905 of Russian portrait paintings that opened in St. Petersburg. He took an art exhibition to Paris the following year. A year later, he was presenting Russian music concerts for Parisian audiences. He produced Mussorgsky’s opera, Boris Godunov, at the Paris Opera in 1908. He was invited back the next year. He formed the Ballets Russes which included such notable ballet stars as Anna Pavlova and Vaslav Nijinsky. The first performance, May 19, 1909, was highly successful.

Diaghilev staged ballets to music by Rimsky-Korsakov, Tchaikovsky, Igor Stravinsky, Manuel de Falla, Maurice Ravel and many other composers of his day. George Balanchine, choreographer who co-founded the New York City Ballet had been a member of the Ballets Russes.

The painter, Marc Chagall (1887-1985), was known as a “modernist.” He created his own look that combined elements of modern styles with his European Jewish culture. He studied in St. Petersburg with artist, Leon Bakst, who served as a role model for being successful and Jewish. Bakst designed costumes and sets for the Ballets Russes. In addition to being a prolific painter, Chagall created murals, designed sets and costumes for theater and ballet companies. He repainted the ceiling of the Paris Opera, and two of his murals, The Sources of Music and The Triumph of Music, hang in the Metropolitan Opera house at Lincoln Center in New York.

Chagall’s work with stained glass allowed his artistry to show in not only colors and shapes but also with light refraction and how the colors would change depending on the weather. He created stained glass windows for synagogues and churches. In addition to the windows at the Saint-Stephen Cathedral in Metz, France, his stained glass work appears in Jerusalem, Switzerland, Germany, the United Kingdom, Turkey and the United Nations in New York.

There were additional performing and visual Russian artists featured in the opening ceremonies at Sochi. The ones mentioned in this article are a few examples of the wide range of talent that emerged out of various circumstances throughout Russia. Sochi highlighted this talent in its tribute to literature and the performing arts.