Sriracha: The Pleasure of Pain 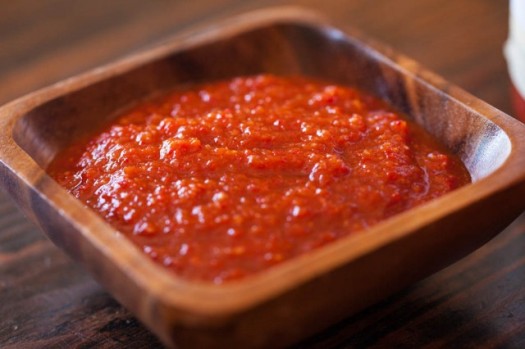 For the uninitiated, sriracha is a popular hot sauce. Made from a mixture of peppers, vinegar, sugar, salt and garlic, it first became popular in the United States in the late 1990s through Los Angeles street food. The popularity of the sauce grew exponentially when popular chain restaurants, such as Applebee’s and P.F. Chang’s, began using it back in 2000. Now, sriracha can be found everywhere from WalMart to high-end restaurants. The burning question still remains as to why it has become so popular.  The short answer has to be that sriracha sauce is, for many people, a tasty way to experience pleasure, even if that pleasure results from pain.

Sriracha can only be described as an Americanized version of an Asian sauce. Originating in a Taiwanese town by the same name, sriracha has been around for a very long time. The sauce marketed in the United States is not recognized as an official sriracha sauce in Taiwan, or practically anywhere else in East Asia. The original use of sriracha was as a condiment or dipping sauce. Now it is used on practically anything.

The sauce is used on anything ketchup has been used on, from hot dogs to scrambled eggs. It has been mixed into mayonnaise and creamy cheeses to create dips and has adorned the culinary delights dished up in premiere New York City restaurants. Sriracha has been used to make hollandaise, top ice cream, imbue a spicy kick in Bloody Marys and has even been made into lollipops. It even goes on ethnic dishes where other hot sauces have historically drawn the line. The Asian roots make the sauce trendy, while the simple ingredient list keeps it versatile.

Many hot sauces are just that, hot. They add heat to dishes which need a bit of spice, they burn the tongue, and they pull 20-somethings into collegiate type battles of who can be the manlier man. What chili-heads have always known and sriracha is publically teaching, is that hot sauce has the ability to morph pain into pleasure. Until sriracha though, hot sauces on the market were mostly about heat and less about taste. Chili-heads were an exclusive group, pushing each other to the limits of both ability and rationality, all for the endorphin rush that follows the pain of the spice.

The burning sensation of hot sauce on the tongue alerts the body that something is amiss. The spice comes from a chemical in peppers known as capsaicin.  Capsaicin has the unique ability to trigger a specific receptor in the tongue, a receptor known as TRVP1. It is, in fact, the only one that capsaicin triggers at all. When TRVP1 is activated by the capsaicin, it sends a signal to the brain that indicates the presence of heat in the mouth. The knowledge that the burning sensation is caused by spice and not fire is not readily recognized and the body goes into combat mode.

One of the initial reactions in the human body to pain is the release of endogenous opioids, better known as endorphins. These endorphins are natural pain killers. Like prescription pain killers, endorphins act not only as an analgesic but then promote a feeling of well-being. Basically, the body’s reaction is to first deaden the pain and then provide a natural shot of pleasure. So, eating something with a higher level of spice, such as sriracha, first causes pain which the body fights off by providing pleasure.

The difference between many previously marketed hot sauces and sriracha appears to be the addition of sugar. The addition of sweetness in what was predominately a spice-only experience opens the market up to a wider, more varied group of people. From chili-heads to housewives, everyone seems to be jumping on the capsaicin bandwagon.  Hot sauce has become America’s new ketchup. Now the pain to pleasure response is available in a mainstream and consumer-friendly source that goes by the name “sriracha.”