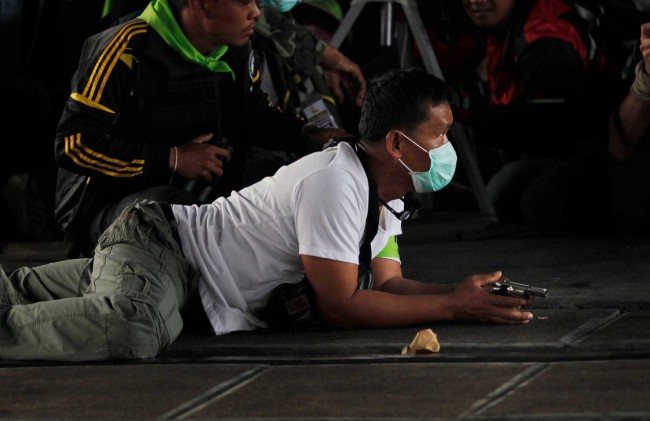 Thai voters cast their ballots in the polls amid chaos around the nation on Sunday, a day after the gun battle rocked the capital city of Bangkok. The opposition protesters have vowed to disrupt the election, which can result in further violence and political instability after the election.

The polls peacefully opened at 8 a.m. Bangkok time, after  seven people were wounded by the gun battle between supporters and opponents of Prime Minister Yingluck Shinawatra near a shopping mall in Bangkok on Saturday. The fight erupted when government supporters demanded protesters not to disruption voting. However, the voting was halted in several districts located in the strongholds of opposition parties because protesters blocked the government official delivering ballots or turned away voters from entering polling stations. The voting is likely to be interrupted in the opposition areas in the capital and south Thailand, while the polling is expected to take place as normally in the pro-government regions of north and central Thailand.

The Election Commision last week asked Ms. Yingluck to postpone the election. But she refused the request, despite the fact that a sizable number of registered voters could not cast ballots after protestors blocked polling stations in Bangkok. Puchong Nutrawong, an official from the Election Commission, which was trying to protect the supporters of Prime Minister Yingluck Shinawatra, told Reuters that the election has been filled with obstacles and that it can turn into a “bloody election.” Suthin Thararin, a leader for the People’s Democratic Reform Committee, was killed last week after he led protesters to block a polling station in Bangkok.

To prevent any further disruption to the election and more fatalities, the army stated that it will deploy more than 5,000 troops in Bangkok, where opposition protesters set up blockade in major traffic junctions and government buildings for several weeks in order to throw out the current government and set up an unelected “people council.” Police stated that 100,000 officers will be deployed nationwide. Even after Thai completed casting ballots amid serious tensions throughout the day, however, it is reported that the political battles following the election are expected to plunge the nation further into chaos.

The current protest started when Ms. Yingluck tried to pass a broad amnesty bill that would have overturned corruption convictions against her brother, Thaksin Shinawatra, the former Prime Minister living in Dubai after ousted by the military in 2006. His party, the People’s Power Party, was dissolved, but his supporters formed the Pheu Thai Party, which won the landslide victory in the 2011 national election taking 262 out of 500 seats in the Thai House of Representative.

The opposition parties believe that Thaksin, whose wealth Forbes estimates to be $1.7 billion, is a corrupt capitalist who has earned political loyalty from millions in northern and central regions with overly generous government subsidies and free healthcare. They believe that he is controlling his sister and her government behind the scene while living in Dubai. The Financial Times describes the roots of such belief as being rooted in the mentality of Thailand’s conservative elite leading middle-class. This is leading some Thais to protest against what they consider to be a corrupted government.

The critics of oppositions, however, say that the protest has lost its original, legitimate goal for government reforms but instead is causing death and injury and destroying an extremely fragile Thai economy. The tension led to 10 death and more than 600 injuries. Economists estimated that the current political turmoil cost Thailand $1.3 billion. Even after Thai voters completed casting ballots on Sunday, many experts indicate that it will not be easy for Thailand to escape from ensuing political and social chaos amid confusion whether the election was even valid.