Utah Men Charged With Felonies for Pushing a Rock [Video]

By Brett Byers-Lane on February 1, 2014Comments Off on Utah Men Charged With Felonies for Pushing a Rock [Video] 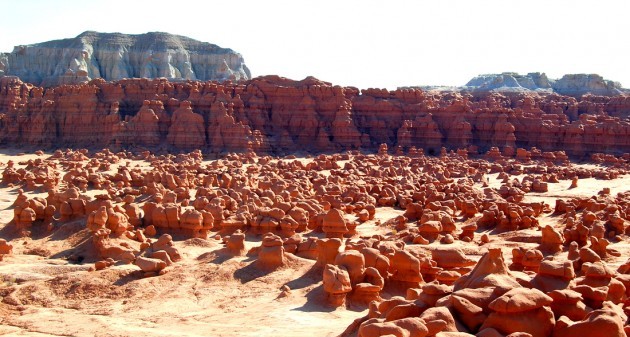 There are plenty of rocks in the world, but two ex-scout leaders in Utah were certainly pushing their luck when they picked the absolute worst rock to move. Now, both men are charged with felonies in relation to the incident which they filmed and uploaded to the internet.

Taylor and Hall could have taken their tomfoolery to any number of locations, but instead they elected to bring their silliness to Goblin Valley State Park in Utah. The sandstone formations that have made this park so famous are called hoodoos, and many have remained untouched for hundreds of millions of years.

Some of the formations have bulges at the top referred to as “goblins,” and these rocks are sometimes held fairly loosely in place. If an individual were to say, climb atop the hoodoo and push the goblin forcefully, it would budge and therein break relatively easily.

It is here where Taylor and Hall come into the picture. With a mind for mischief, the ex-boy scout leaders took it upon themselves to take their landscaping know-how to the natural beauty of the park. And, luckily for prosecutors, the unwitting heroes video taped the whole ordeal.

Essentially, the Utah troop leaders documented their exploits. Taylor is the star as he spends around a quarter of a minute pushing the formation until it falls. Hall works as the production team by egging Taylor on, video taping the adventure, and cheering triumphantly when the rock finally gives way. Both men are now charged with felonies in Utah, and all for a very stupid decision that pushing a rock in a state park was somehow reasonable.

If the prosecution is successful, both men could receive $5,000 in fines and an additional five years in prison for the whole ordeal.

Further complicating the matter is Taylor’s supposed “disability,” which he is in the middle of pursuing in a lawsuit of his own. He claims that in a car accident involving a teenage driver, he suffered injuries resulting in a disabling back injury.  Usually when people are seriously disabled, however, they are not able to aggressively push over a boulder.

Another issue is that the goblin is technically priceless. Thus, charging the two bumbling landscapers becomes difficult because it is impossible to price or replace the formation.

Lawmakers in Utah are currently considering a bill that would make state parks better protected against this sort of idiocy. If passed, it will more clearly outline how illegal and unintelligent it is to cause havoc for no good reason in a protected natural area.

Some may consider the whole incident grossly over-exaggerated. After all, the two men are charged with felonies for essentially pushing a big rock.  Others believe, though, that the Utah troop leaders did far more than move a boulder, they defaced a public park for no good reason, all in front boy scouts.